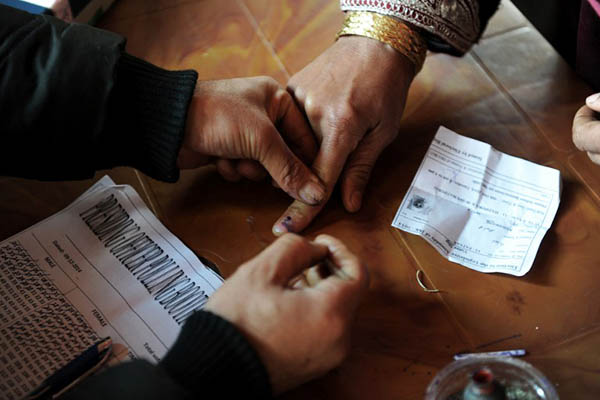 Muslim BJP candidate claims people may not like the prime minister, but will vote for his economic policies.

Indian-administered Kashmir’s main city of Srinagar voted Sunday in continuing elections in the troubled Muslim-majority region, where the party of Hindu nationalist Prime Minister Narendra Modi is making an unprecedented bid for power.

As armed police patrolled the streets in bulletproof vests, voters queued to cast their ballots in freezing weather in Srinagar and the Kashmir Valley, where a separatist campaign is centered. Some 1.4 million residents are eligible to vote in 18 seats in the latest phase of the elections in the region, where a dozen rebel groups have been fighting Indian rule since 1989.

After winning power at national elections in May, Modi and his Hindu nationalist Bharatiya Janata Party (BJP) are trying to take control of the state’s parliament with a promise of economic development. The BJP is fielding 32 Muslim candidates across the disputed region, where voters have so far ignored calls from separatists to boycott the election.

BJP candidate and Muslim Hina Bhat said voters might not like Modi, but like the rest of the country they believed his promise of economic prosperity. “People will support Modi because now, like Muslims in India outside Kashmir, they know he delivers,” the dentist-turned-politician said. “The local parties have treated Kashmiri people like cattle,” Bhat, 35, told AFP recently in an interview while campaigning in Srinagar. “Here [in Kashmir] also people know in their hearts that going with Modi is good for them,” she added.

The BJP has traditionally had no base in the Kashmir Valley, where resentment against Indian rule runs high.

The picturesque Himalayan region is disputed between India and Pakistan and has been the scene of two wars between them. Tens of thousands of people, mostly civilians, have died in violence between Indian security forces and rebels fighting for Kashmir’s independence or for its merger with Pakistan. So the idea of the BJP taking even a share of power in Kashmir would have been unthinkable only a few months ago.

But Modi’s landslide national election win, and a meltdown in support for the incumbent chief minister after deadly floods in September, have given the BJP hope of a breakthrough. Backed by a media blitz, Modi himself has addressed four campaign rallies in the territory since elections were announced in October, promising economic growth and corruption-free government and steering clear of discussing the territory’s disputed status.

Some analysts said Modi’s “development-only talk” in Kashmir was a simplistic approach. “No Indian prime minister is going to make a difference in Kashmir unless he addresses the dispute,” said columnist Siddiq Wahid.

But Bhat said change would only come to the region through development and not endless talk about independence. “It is now up to the people whether they want to sulk and crib about their situation or they want a change,” she said. Election results are due on Dec. 23.