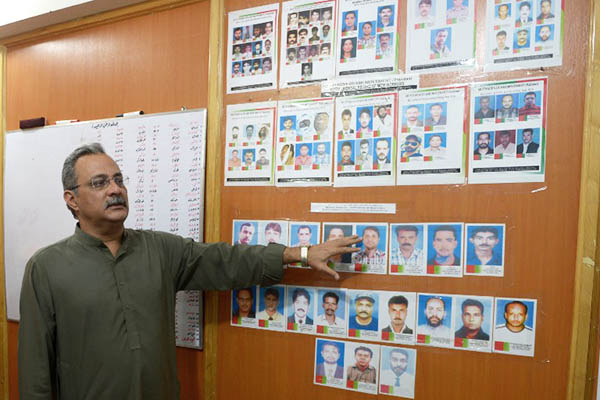 Residents of Pakistan’s largest city accuse police and paramilitary forces of extra-judicial killings in bid to eradicate terrorism from city.

Sohail Ahmed was picked up last December by a bunch of burly men outside his local mosque in Karachi and shoved into an SUV. It was the last time his family saw him alive. A month later his body was found on a football field, bearing marks of severe torture.

Ahmed’s relatives and officials from the Muttahida Qaumi Movement (MQM) political party, to which he belonged, believe his death fits a pattern of extra-judicial killings carried out by security forces as part of a “cleanup” operation aimed at driving down crime and militancy.

“They were agencies from our country. Is this not terrorism? To pick someone up, torture and kill them?” asked his sister Humaira Ifthikhar, tearfully.

Karachi, a sprawling port city of 18 million people, has been wracked by criminal, ethnic and political violence since the 1990s. In recent years it has also become a home to Islamist militants. The MQM, the dominant political force in the city, stands accused by critics of running a violent mafia-like organization, but the party strongly denies this and presents itself as a voice of political moderation and secularism.

Some of those who have lost their lives in encounters with security forces on Karachi’s streets are believed to have been suspected of involvement in the party’s armed wing, or to have links with the Taliban or Al Qaeda. An operation by police and paramilitary forces launched in 2013 has brought murders down from a rate of seven or eight a day to two or three, along with a 23 percent fall in street crime.

The campaign took a fresh turn two weeks ago when paramilitary Rangers raided the MQM headquarters, seizing weapons and arresting activists, including one convicted of murdering a journalist. But critics say the crackdown has involved an unacceptable disregard for the judicial process, with security personnel effectively “executing” suspects in staged clashes known locally as “encounter killings.”

The police deny that such killings take place. Ghulam Haider Jamali, chief of the province’s police force, instead extols what he calls effective police action. “Karachi was having extraordinary challenges. Karachi has terrorist infested areas. They come from across the country, they were killing police personnel, they were targeting Shias and innocent citizens of the city, the Ulema, members of the civil society,” he said. “The situation demanded we should go for strong action against the criminals and militants. We have been able to control the situation and bring the crime down.”

According to police figures, since July 2014 at least 895 criminals and militants were killed in gun fights. On the streets, residents say they feel safer and are able to go to previously dangerous areas like the Taliban-infested Sohrab Goth district, where the Rangers have conducted several raids.

“You couldn’t go out at night,” said Haji Abdullah Shah Bokhari, a local preacher. “If you did, you would not expect to go home alive. Now we feel much safer.” But rights activists and medical examiners who have followed the killings closely privately voice grave doubts.

At the city’s main Jinnah Hospital, a senior official who asked to remain unnamed pointed out that most victims of “fake encounters” have telltale signs quietly ignored in reports. “Most of them are gunshot wounds. It’s usually not from an actual fight. The question to be asked is if 10 people were killed, why wasn’t a single cop shot? Why wasn’t a single cop injured?” the official said.

Another medical official with extensive experience of the cases said victims were often shot at close range through a piece of tyre, which shields the body from residue and gives the impression the shot was fired from a distance.

Abdul Hai, a researcher at the independent Human Rights Commission of Pakistan who investigates such cases, argued that far from being effective, the killings simply perpetuate the cycle of violence. “Our state law should be implemented. By using fake encounters, you also run the risk of killing innocent people. Just because you pick them up it does not make them guilty,” he said.

Haider Abbas Rizvi, a senior MQM leader, told AFP that between 2013 and 2014, 36 people from the party had been “killed extra-judicially” by law enforcement agencies. “We have more than 12 people missing from October 2013 to date. Most of them have been abducted or arrested by plainclothes [police] in white Vigos,” he said. “People have been gone missing. The same is the case with extra-judicial killings. And most of them are found in the mortuary of Karachi.”

In the city’s tough Lyari neighborhood, populated largely by ethnic Baloch, joining a gang is a way of life—and a means of survival. Sakina Sharif, a 60-year-old ethnic Baloch from Lyari, has no qualms admitting her elder son Rashid Rekha, killed in 2013, was involved in gang activities.

Rekha was walking home with his toddler daughter when Rangers showed up to arrest him, said Sharif. “The Rangers arrested him in front of so many witnesses. They took him one block further to Block C. They shot him three times: one in the neck, chest, and one in the abdomen,” she said.

Officially Rekha was said to have been killed in another firefight.

A year later Sharif’s second son Irshad, who she says was not involved in any gangs, disappeared, only to show up dead on a highway outside the city along with a friend. “I don’t want revenge, I want justice. I have to know what happened to my son and his friend Nasir. I believe it is for Allah to take revenge but I need to know who took my son,” she said.