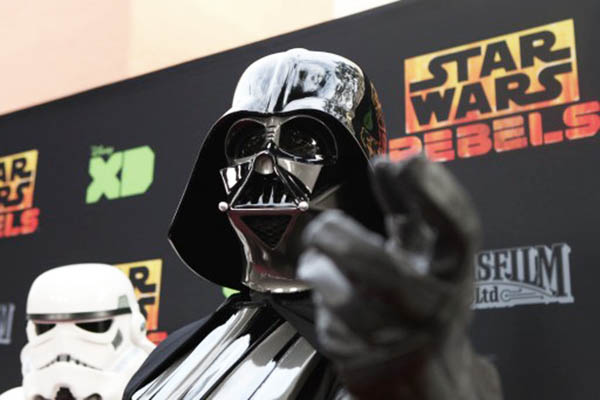 The date was 1977, and no one had yet worn a copper bikini to bed, made “whooshing” lightsaber noises with a broomstick or yelled “May the Fourth be with you” at strangers. But that was all about to change as a 33-year-old Californian filmmaker named George Walton Lucas Jr. prepared to release his third feature—a far-fetched, slightly corny intergalactic saga of good and evil starring a sulky farm boy with daddy issues.

Jump forward 40 years and Star Wars has grown into the most lucrative and influential movie franchise of all time—Princess Leia’s signature side hair buns are all the rage on Halloween and Jedi is an official religion in several countries.

“I’m running out of hyperbolic adjectives to describe the power of Star Wars, but that’s because it is the ultimate standard-bearer,” Shawn Robbins, chief analyst for BoxOffice.com, told AFP. “Four decades of record-breaking, genre-defining entertainment across film, television, video games, toys, books and everything else the brand has touched simply speaks for itself.”

With its indie flick budget of just $11 million, the brash-looking Star Wars opened on Wednesday, May 25, 1977—the anniversary falls on Thursday—on an inauspicious 32 screens, taking in $1.6 million on its first weekend.

Its first theatrical run ended with a phenomenal $221.3 million while various reissues by 20th Century Fox brought the domestic total to more than twice that amount.

The premiere was at the Chinese Theater in Hollywood, where it played to sold-out audiences five times a day for over a year, according to resident historian Levi Tinker, who told AFP the crowds literally wore out the hand-woven Chinese carpet in the lobby. Two sequels—The Empire Strikes Back (1980) and Return of the Jedi (1983)—grossed more than $450 million each worldwide, but there were sizeable bumps in the road ahead.

Lucas’s 1997 “special edition” reissues were met with jeers thanks to digital tweaks deemed unnecessary or downright off-putting. Then there was the Lucas-directed 1999-2005 prequel trilogy beginning with The Phantom Menace—films considered sub-par in almost every department.

The 73-year-old filmmaker—who had struck a deal with Fox to keep 40 percent of the gross from the original movie, as well as merchandising and sequels rights—was just as shrewd when he sold LucasFilm to Disney in 2012 for a staggering $4 billion.

The Mouse House breathed new life into Star Wars with the announcement of a sequel trilogy and three standalone “anthology” films, and has already added $3 billion with its first two movies to bring the total box office past $7.5 billion.

Speculation is already building over the future of the franchise with the approach of the final movies by 2020 but, long before then, fans have Rian Johnson’s The Last Jedi—the second of the sequels—to look forward to in December. It continues seamlessly from The Force Awakens (2015), which became one of three films in history to take $2 billion after posting the biggest domestic and worldwide debuts ever.

“The Last Jedi now has the potential to challenge those numbers and—particularly given the goodwill generated by The Force Awakens and Rogue One—it is set up to be an absolute monster,” said Paul Dergarabedian, a senior analyst at comScore.

Jeff Bock, of Exhibitor Relations, believes the untimely death of Fisher in December will give The Last Jedi the same boost experienced by Fast and Furious 7 and The Dark Knight Rises after the deaths of Paul Walker and Heath Ledger.

In any case, experts agree that LucasFilm is unlikely to want to let go of a franchise that can add $1-2 billion with each new release, even if fan fatigue is an ever-present threat. “Like the universe itself, Star Wars will just keep expanding into the infinite,” said Bock. “Literally, there is no end in sight for this franchise.”