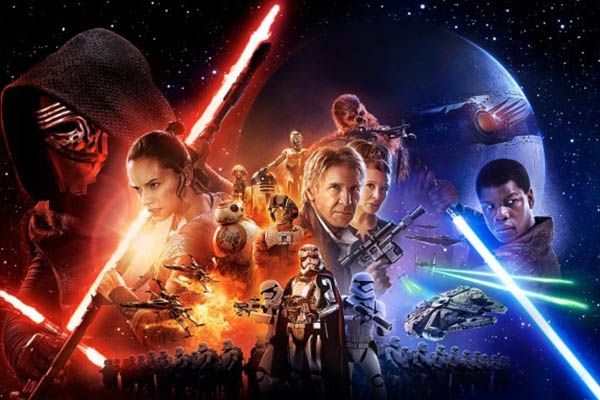 Latest installment of space opera franchise is only the third film to ever reach that mark.

Star Wars: The Force Awakens has soared to the $2 billion mark in global ticket sales, Disney announced Sunday, as the movie landed in fourth place at the North American box office, behind Kung Fu Panda 3 in the top spot.

The latest Star Wars franchise became only the third film ever to reach the $2 billion mark, and is only the second to do so in a first release, Disney said in a statement. It also set a domestic record with $900 million in ticket sales on Wednesday, making it “the only film in history to reach this milestone,” Disney reported.

Weekend estimates showed that it would rake in $6.9 million Friday through Sunday for a grand total of $906 million since its debut last year.

DreamWorks’ computer-animated Kung Fu Panda comedy—the third installment in the franchise—meanwhile earned some $21.0 in its second weekend out, industry tracker Exhibitor Relations predicted. Following the adventures of Po as he evolves from martial arts student to teacher, the U.S.-Chinese production features the voices of stars Jack Black, Dustin Hoffman and Angelina Jolie.

The celebrity-studded Coen Brothers’ Hail, Caesar! a 1950s kidnap caper about a Hollywood fixer trying to keep a studio’s stars under thumb, debuted in second place with $11.4 million. The picture casts George Clooney, Scarlett Johansson, Channing Tatum, Josh Brolin and Jonah Hill side-by-side, among a slew of other well-known faces.

In third place was critically acclaimed The Revenant, a grisly tale of backcountry survival and revenge starring Leonardo DiCaprio. The film, which has been showered with Oscar nominations, earned an estimated $7.1 million.

Coming in fifth behind Star Wars was The Choice, a romantic-drama based on the Nicholas Sparks novel of the same name. The film, typical of the Sparks genre raked in some $6.1 million.

Rounding out the estimates for the rest of the top 10 were:

Pride and Prejudice and Zombies, $5.2 million