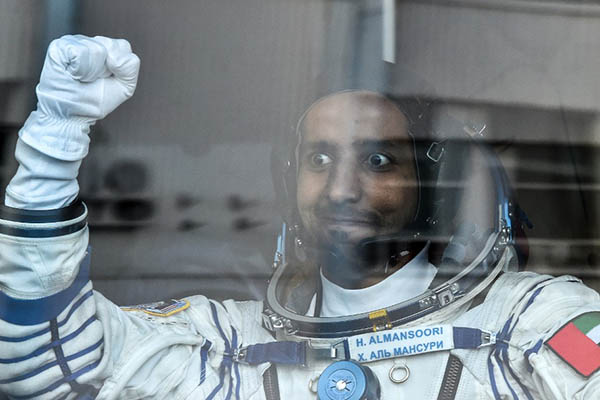 U.A.E. celebrates the launch of its first astronaut in space

A crowd in Dubai erupted in cheers and applause on Wednesday as the first astronaut from the United Arab Emirates launched towards the International Space Station, dubbing him a national hero.

Emiratis and school children gathered at the Mohammed Bin Rashid Space Centre as Hazzaa al-Mansoori, 35, blasted into space accompanied by Russia’s Oleg Skripochka and NASA astronaut Jessica Meir onboard a Soyuz rocket from Baikonur in Kazakhstan.

A former pilot in the U.A.E. armed forces, he will be the first Emirati astronaut and the first Arab on the orbiting laboratory, but not the first Muslim.

Some people gathered at the Dubai center carried U.A.E. flags, while others were dressed in blue jumpsuits spelling out: “Future astronaut.” Badriya al-Hamadi, 38, said she was so proud of the historical moment, adding: “I feel like I am the one going to space.”

According to Amer Al-Ghafri, of the Mohammed Bin Rashid Space Center, Mansoori’s launch is only just the beginning of the U.A.E.’s dreams of space exploration. “There are a lot of ambitions and a lot more work,” he said.

Mansoori received support from around the world before lifting off on what he described as his “dream” mission. He will spend eight days on the ISS, where he plans to conduct experiments.

Writing on Twitter before the launch, Mansoori said he was “filled with this indescribable feeling of glory and awe.” He added: “Today I carry the dreams and ambition of my country to a whole new dimension. May Allah grant me success in this mission.”

A Quran, a U.A.E. flag, pictures of his family, and a book by Ruler of Dubai Sheikh Mohammed bin Rashid Al-Maktoum were among the few things he was allowed to pack for his space adventure. Dubai’s iconic Burj Khalifa, the world’s tallest skyscraper, lit up the moment of blast-off at 5:57 p.m. local time.

Sheikh Mohammed, also the U.A.E.’s vice president and prime minister, vowed in 2017 to send four Emirati astronauts to the space station within five years. “The arrival of Hazzaa al-Mansoori to space is a message to the Arab youth… that we can progress and move forward,” Sheikh Mohammed said on Twitter on Wednesday. “Our next stop is Mars.”

The astronaut program would make the U.A.E. one of only a handful of states in the Middle East to have sent a person into space, as it looks to make good on a pledge to become a global leader in space exploration.

As part of its space plans, the U.A.E. has also announced its aim to become the first Arab country to send an unmanned probe to orbit Mars by 2021, naming it “Hope.” In the long-term, it says it is planning to build a “Science City” to replicate life on Mars and aims to create the first human settlement on the red planet by 2117.

But already, Emiratis believe they have shown the world what they can do. “We have talent here in the U.A.E., and now the world will see that,” said Fatima Al-Ghurair at the Mohammed Bin Rashid Center.