Home Lightbox State of the Nations

State of the Nations 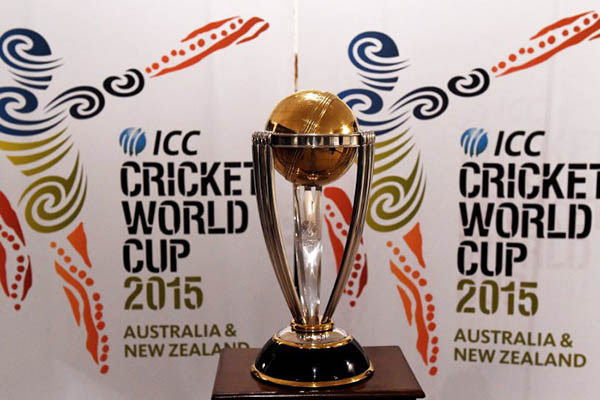 The 2015 World Cup takes place in Australia and New Zealand from Feb. 14-March 29 where India will be the defending champions in the 14-nation tournament. One month out from the start, AFP Sports updates the current form and prospects of the competing teams:

Afghanistan’s main target for the World Cup is to beat Bangladesh and fellow associates Scotland. If they win both those pool games then the country’s maiden appearance will be judged a success. Afghanistan will look to their four pace bowlers—Dawlat Zadran, Shapoor Zadran, Aftab Alam and Hamid Hassan—for breakthroughs. Mohammad Nabi, Samiullah Shenwari and Javed Ahmadi will take care of the spin department. Former coach Kabir Khan has warned against any major expectations. “Don’t expect any super performance from the Afghan team,” said Kabir. A 3-1 series defeat against United Arab Emirates in November and a loss to Ireland in Dubai this week highlighted batting frailties, which may be further exposed on the hard, bouncy pitches of Australia and New Zealand.

Hosts Australia head into the World Cup on the back of a 4-1 series win over South Africa in November and will have their final hit-out in a tri-series against defending champions India and England. Michael Clarke has been named as captain depending on a fitness test after recent hamstring surgery with George Bailey standing by should he not make the deadline. Selectors named a strong 15-man squad, featuring David Warner, Aaron Finch, Steve Smith, Shane Watson, Mitchell Johnson and all-rounders James Faulkner, Mitchell Marsh and Glenn Maxwell. The Aussies will be among the favorites for a record fifth World Cup after wins in 1987, 1999, 2003 and 2007. India ended the Australians’ 12-year reign as champions with victory in the quarter finals of the last 2011 event in Ahmedabad.

So poor has been Bangladesh’s international record over the past year that even a 3-0 Test thrashing at home of fellow wooden-spooners Zimbabwe followed by a 5-0 sweep in the one-dayers was regarded as a moment to celebrate for millions of their supporters. Those were the only wins for the Tigers through 2014, but still it gives them belief that all is not lost. Gone are the heady days when Bangladesh stunned Australia in a one-dayer in England and knocked India out of the 2007 World Cup. They now hope to turn over a new leaf under new one-day captain Mashrafe Mortaza, with support from star all-rounder Shakib Al Hasan and dependable wicketkeeper-batsman Mushfiqur Rahim. Still, with four other Test nations in their group, Bangladesh will be considered to have done well if they qualify for the knockout rounds.

Test skipper Alastair Cook, who had scored just one 50 in his last 22 one-day innings, has been replaced as captain by former Ireland batsman Eoin Morgan. However, Morgan has been struggling for runs as much as Cook in recent times with an ODI average of just 16 during the past 12 months. But England are banking on the fact that captaincy appears to agree with the Middlesex batsman—in eight matches leading his adopted country he averages 71. England have never won the World Cup and, while the return to fitness of strike bowlers James Anderson and Stuart Broad promises to bolster their hopes, few expect them to be crowned champions at this year’s edition. Meanwhile, just when England thought the furor surrounding former captain Kevin Pietersen might be calming down, the axed batsman—playing in Australia’s domestic Big Bash Twenty20 tournament—stirred the pot further on Tuesday by saying Morgan would “love to have me in the England team.”

Co-hosts New Zealand go into the World Cup brimming with confidence after posting ODI series wins against South Africa, India, Pakistan and the West Indies over the past two years. The Black Caps have reached the semi-finals six times (1975, 1979, 1992, 1999, 2007, 2011) and are desperate to shed the tag of perennial also-rans on home soil. Under captain Brendon McCullum, they have become a disciplined, aggressive unit boasting youthful talent such as batsman Kane Williamson alongside veterans like Dan Vettori, who will be contesting his fifth World Cup.

The scale of the task facing a Scotland side taking part in the World Cup for the first time since 2007 was emphasized when they suffered a crushing eight-wicket defeat by Afghanistan in Dubai last week. Getting sufficient runs on the board to keep themselves in the game promises to be a major issue for a Scotland side who did, though, see Matt Machan make 86 in a total of 216 for nine in their loss to Ireland on Tuesday. Scotland will look to make use of the local knowledge of their New Zealand-born coach Grant Bradburn ahead of their clash against England in Christchurch on Feb. 23 while their backroom staff also includes former England all-rounder Paul Collingwood.

This could be Sri Lanka’s year after heartbreaking failures to cross the final hurdle on the last two occasions. The 1996 champions were beaten by Australia in the 2007 final and lost in another title clash four years later to India. But the signs this time are encouraging. One of the most consistent teams in recent years, Sri Lanka finally broke through the final hurdle again to win the World Twenty20 in Bangladesh last year. In Kumar Sangakkara, Sri Lanka boast the most successful one-day batsman of 2014 with 1,256 runs in 28 innings at 46.51. The veteran left-hander is in prime form in all forms of the game and, with long-time teammate Mahela Jayawardene, holds the key to the team’s success in the World Cup. And in sling-arm fast bowler Lasith Malinga, Sri Lanka has one of the most devastating one-day bowlers.

The defending champions go into the World Cup with a revamped team that includes just four players who were part of the winning combination in 2011. The young team got a taste of tough Australian conditions during the unsuccessful Test series and will hope to recover morale in the tri-series against England and Australia prior to the World Cup. Inspirational captain Mahendra Singh Dhoni’s sudden retirement from Test cricket gives him space to plot his team’s strategy to defend the title. With a modest bowling attack, India will rely heavily on the skills of its batsmen like Virat Kohli, Rohit Sharma, Ajinkya Rahane and Dhoni himself to chase down any target set by the opposition. But doubts remain over whether the team can play consistently well during the long six-week campaign.

The Irish will be looking to add to a list of Test nation World Cup scalps that includes Pakistan (2007) and England (2011) with a squad where five players including skipper William Porterfield and brothers Kevin and Niall O’Brien will be taking part in their third edition of the tournament. Warwickshire batsman Porterfield is one of several players with English county experience including Middlesex seamer Tim Murtagh. However, the paceman suffered a foot injury during the team’s training camp in Dubai and faces a race against time to be fit. Last Saturday saw Ireland beat Afghanistan by three wickets and they defeated Scotland by the same margin on Monday.

Without their outstanding spinner Saeed Ajmal, Pakistan will hope their inexperienced bowling attack come good to take them to the knockout stages. Ajmal withdrew over an illegal bowling action, forcing Pakistan to select unheralded leg-spinner Yasir Shah instead. Pakistan will also hope suspended all-rounder Mohammad Hafeez clears a bowling action test later in January. Pakistan, the 1992 champions, must win at least one of their first two games against India and the West Indies to qualify for the quarterfinals. If not they will face a real test against Ireland in their last group game, where the ghosts of the 2007 World Cup defeat may return to haunt them.

The return to full fitness of Quinton de Kock and JP Duminy is a priority for South Africa, who will be among the tournament favorites. The combined talents of de Kock, a dashing opening batsman and capable wicketkeeper, and Duminy, a solid middle order batsman and useful off-spinner, are essential elements in a squad short on quality all-rounders. De Kock is out of action because of an ankle injury but hopes to be fit for the start of the World Cup. Captain AB de Villiers could keep wicket in the early games but is too valuable a batsman to be burdened with the gloves throughout the campaign. Duminy was sorely missed when South Africa were beaten 4-1 in an away series by Australia and his return from a knee injury was twice postponed ahead of a current one-day series against the West Indies. South Africa, yet to win a World Cup knockout game, are keen to play seven batsmen in most games, which could leave them light on bowling, with Duminy having to play a key role.

The United Arab Emirates are playing in the World Cup for the first time since 1996 and only booked their 2015 spot via the final round of qualifying in New Zealand last year. Coached by former Pakistan pace bowler Aaqib Javed, the U.A.E. also reached the World Twenty20 in Bangladesh in 2014. Dubai native Mohammed Tauqir, 43, and the oldest player at the tournament, has been named as captain replacing Pakistan-born Khurram Khan who had been in charge for seven years. U.A.E. officials justified their decision on the basis that the sport needs to grow amongst local Emiratis and not just feed off expatriate talent. Tauqir is no mere figurehead, however. In November he became the oldest player to make an ODI century when his 132 helped the U.A.E. to victory over fellow World Cup qualifiers Afghanistan.

The champions of the first two editions in 1975 and 1979, the West Indies head for the 2015 World Cup in familiar turmoil. The selectors’ decision to axe former ODI captain Dwayne Bravo as well as Kieron Pollard—two potential match-winners—sparked accusations of victimization from superstar batsman Chris Gayle after the pair was pinpointed as ringleaders in the squad’s controversial decision to abandon the October tour of India over a pay dispute. Jason Holder, the 23-year-old Barbados fast bowler, with just 21 ODIs under his belt, will skipper a side which has at least been buoyed by the return to fitness of strike bowler Kemar Roach as well as key spinner Sunil Narine despite questions raised over his action last year.

Zimbabwe has not played a full international since Dec. 1, when Bangladesh completed a 5-0 rout of the touring team. In the aftermath of that series five players failed to make the World Cup squad while eccentric coach, Stephen Mangongo, was fired and replaced by the much-traveled Australian Dav Whatmore. Five of the squad played for Zimbabwe A in a four-match series against Canada but no other matches are scheduled ahead of a pre-tournament camp in Dubai and Zimbabwe’s two official World Cup warm-up matches against New Zealand and Sri Lanka. Among those brought in for the World Cup are Stuart Matsikenyeri and Chamu Chibhabha, who have not played for their country since 2012 and 2013, respectively, while the experienced Prosper Utseya, banned from bowling off-spin because of an illegal action, has been selected after converting himself into an accurate bowler of medium-pace cutters.