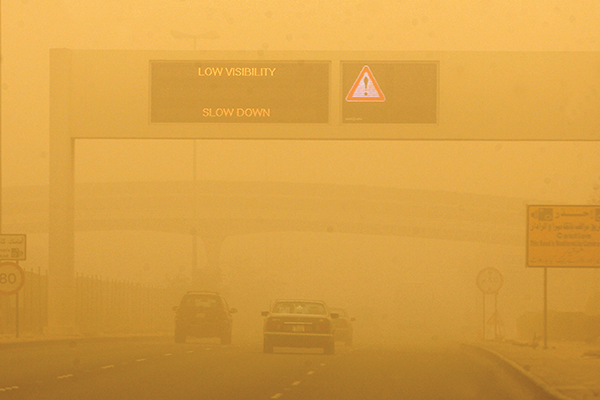 Ethnic prejudice in the Middle East.

The oil-rich Middle East depends on migrants—from legions of house servants to the construction workers who build the region’s gleaming, sky-high edifices. Yet their voices and inner lives have been less present in its literature.

A glimpse of this rich seam is available in a harrowing yet redemptive novel, translated from south India’s Malayalam language, in which an Indian diver enslaved as a goat herder in the Saudi desert finds himself forced to live like the animals he tends. Goat Days, written in 2008 by a writer in Bahrain whose pen name is Benyamin and published by Penguin India, recalls literary classics of captivity and liberation from gulags to slave plantations. But the true story behind it is to some degree emblematic of the lives of millions of workers in the Arabian Peninsula. Goat Days made the long list, in a strong year, of the Man Asian Literary Prize—a $30,000 pan-Asian prize awarded in Hong Kong (and funded until now by the sponsors of the Man Booker Prize).

Now another novel that lays bare social attitudes in the Gulf through the eyes of an outsider, this time by a young Kuwaiti writer, is reaching a growing Arab readership, thanks in part to winning the International Prize for Arabic Fiction in April. The $60,000 “Arabic Booker” is awarded annually, during the Abu Dhabi International Book Fair, for the best novel of the year in Arabic. In six years, it has grown into one of the most talked-about literary awards in the Arab world, and a valuable conduit into other languages. The Booker Foundation in London supplies knowhow, while sponsorship was taken up this year by the Tourism and Culture Authority of Abu Dhabi, a Gulf emirate plowing petrodollars into culture—and heavily reliant on migrant labor.

Saud Alsanousi’s winning novel, The Bamboo Stalk, is set in Kuwait and the Philippines, from 1985 to the near present. Its hero, José Mendoza, also called Eissa Al-Tarouf, is the son of a Kuwaiti journalist and a Filipina housemaid, whom his father married for love but abandoned. Packed off to the Philippines with his mother as an infant, José returns, age 18, to the country he views as a lost paradise. But as a mixed-race Kuwaiti, he hits a wall of prejudice, not least from his own high-class relatives. The novel, which is said to raise disquieting questions about national, racial, and religious identity, was praised by the chair of judges, Egyptian writer Galal Amin, as daring and moving. An extract is available in English in Issue 46 of Banipal magazine, and the prize guarantees that the novel, Alsanousi’s second, will be translated.

In Abu Dhabi after the award ceremony, Alsanousi, 31, told me the attitudes he targets are found in all Gulf states where citizens are often outnumbered by non-nationals. Speaking through an Arabic interpreter (though his English is good), he said his is the first novel by a Gulf Arab to have a foreigner as its narrator and hero. It was born of the shock of realizing how foreign workers view Kuwaitis—most of whom relate to them only as laborers or servants.

The son of a town councilor and a school geography teacher, Alsanousi is a banking graduate from Kuwait City. But he chose to work at a baking factory’s sweltering ovens—work he says his compatriots would sniff at: “The salary was terrible, but I wanted to start at the bottom.” Drinking tea with southern Egyptians, and eating with Indians, “broke down the barriers between us. That’s how I learned the negative picture they have of us.” In the ensuing soul searching, “I asked myself the most difficult question: Who are we? Are we what we think we are, or are we as others see us? The answer wasn’t pleasant.”

According to Human Rights Watch, migrants make up 80 percent of Kuwait’s workforce, in a state with roughly 1.3 million citizens and as many non-nationals. Its more than half million domestic workers are almost exclusively migrants—from Asia and east Africa. As well as being excluded from labor protection laws, they are vulnerable to abuse under the widespread kafala, or sponsorship system, which makes workers dependent on their employers for their legal status. Moreover, the IPAF prize-giving coincided with the first regional U.N. conference on human trafficking, held in Jordan in April, which estimated that more than 600,000 migrant workers are tricked or trapped into forced labor across the Middle East.

Even short of abusive employers, Alsanousi is concerned with an indifference that he sees as harming not only foreigners, but Kuwaitis themselves. Breaking down barriers at work, “I got to know myself through knowing other people. We don’t know ourselves in isolation.” The problem is “our seclusion and segregation from others.” Servants “live in the same house, but we never talk or find anything out about each other. For us, that’s normal.”

To discover what drives so many to leave their homelands for his, Alsanousi visited the Philippines, living for a time in a bamboo hut outside Manila, where he learned much about himself, too. “When an old lady came out into the compound to water the plants, I used to turn my face aside out of respect, as we do in Kuwait. She didn’t understand why. But just by my saying ‘Good morning,’ the whole family changed toward me. They brought me food. It was a great experience.” Back in Kuwait, he filled his flat with bamboo stalks, and “watched Filipino channels on TV, though I don’t understand Tagalog, and read only Filipino papers in English, till I was looking through José’s eyes.” So convincing was his narrator that there were false rumors in the Arab press that The Bamboo Stalk was written by a Filipino-Kuwaiti. At a press conference in Abu Dhabi, Alsanousi made a rhetorical point in identifying with his hero: “I say my mother is a Filipino, and I’m proud of her.”

Through a character who brings José to Kuwait but, ironically, has few rights himself, the novel also alludes to the plight of the Bidun—the more than 106,000 stateless people who may have lived in Kuwait for decades. Although Alsanousi sees many as deserving of citizenship, he is uneasy about “those who tore up their papers to avoid being sent back, and took refuge in Kuwait, where the government does everything for you.” The argument echoes one heard across the affluent world, wherever citizenship bestows generous state benefits. Yet, he adds, “I wouldn’t give that group nationality, but I would give them human rights.” Until recent, minor reforms, if Biduns wanted to get married, “it wasn’t recognized, so their children would be illegitimate. A Bidun couldn’t get a birth certificate or a death certificate, so he was eternal. Human rights and citizenship are two different things.”

While the novel charts some progress in women’s rights (Kuwaiti women won the vote in 2005), Alsanousi points out that, unlike men, women who marry foreigners cannot pass their nationality on to their children. He is also a sharp observer of a class system that prevents some Kuwaiti families from marrying into others. “Higher-class families are not free at all. You’re watched continuously to avoid any scandal.”

Alsanousi, who now works in the same baking company’s head office and writes columns for Kuwaiti newspapers, sees it as “our problem as closed societies that we think we’re ideal people, that there’s nothing wrong with what we’ve inherited.” His grandmother still remembers life before oil, when men would spend nine months at sea looking for pearls. A century ago, he says, when there were only 30,000 Kuwaitis “living inside a wall on the sea,” it was a “very closed, conservative, religious society. Now it seems open, but deep down, tradition and custom still govern things.” Gulf citizens may be, like the author, well traveled and feel as at ease in Western dress as traditional robes, “but we’re still insular,” he argues. “We just take our culture in a trunk to Oxford or the Champs-Élysées.”

Pained at others’ image of his compatriots, he wrote his winning novel to “make the reader experience this pain, so they would look for the cure.”