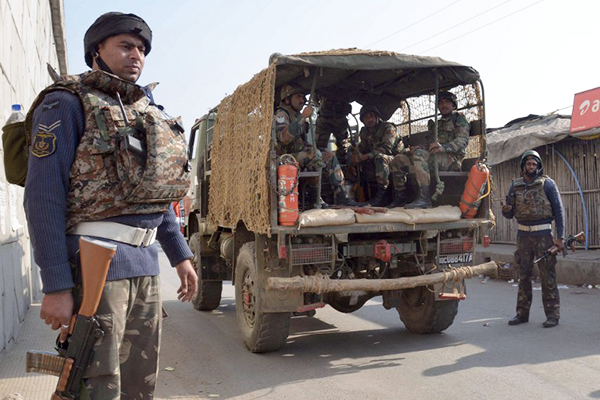 Pakistan and India must cooperate to tackle non-state actors that hurt both states.

The attack on an Indian Air Force base in Pathankot came within a week of Indian Prime Minister Narendra Modi’s pitstop in Lahore, which signaled the end of his earlier policy of disengagement with Pakistan and the resumption of a Comprehensive Bilateral Dialogue.

Some commentators, especially in India, have chosen to link the attack with an attempt by certain elements in Pakistan to derail the normalization process. This argument is not credible to anyone who understands the time and level of preparations required for mounting such an attack.

In other words, unless the attackers and planners, whoever they might be, knew months in advance of the surprise Modi was to spring and started planning the airbase attack, it was not a response to the Dec. 25 thaw.

Yet, such attacks have to be taken seriously because they have the potential to hold any improvement in relations hostage, not just in the east but also with Afghanistan in the west.

In 1959, Professor Robert L. Burns spoke about the dangers and possibilities of a surreptitious attack by a third state which could embroil the United States and then Soviet Union into a nuclear war (The Rationale of Catalytic War). Hermann Kahn in 1960 broadened the definition of catalytic war by arguing that it involved any process by which a country could involve larger nations in a war.

It should not require much convincing to argue that while Burns’ and Kahn’s scenarios, specific to the use of nuclear weapons and involving third states, still obtain, there’s now an even greater danger of non-state actors mounting spectacular attacks to involve states in wars, limited or all-out. At the very least, they have evinced the capability to keep states locked in conflicts, unable to develop trust and break out of the vicious cycle in which they are caught.

The paradox and the irony is that to be effective against non-state actors, states must cooperate at multiple levels. Yet, given the history of the use of such actors as part of covert operations against one another, such attacks only depend the distrust and preclude them from moving forward and building the level of trust required for such cooperation. Non-state actors have a penchant for going rogue and turning on sponsor states. India suffered this in East Punjab and then with the Tamil Tigers. Pakistan is still hurting at the hands of groups it nurtured.

History is a terrible baggage. We all carry it and are conditioned by it. It helps structure our world. Equally, it impedes our efforts to break from the past even when we realize that that is vital to overall security.

Take, for instance, the Indian media commentary during the Pathankot attack: Pakistan backstabs again; clues 1, 2, and 3 that Pakistan is involved; Should Modi continue talking to Pakistan; Can Pakistan ever be trusted, etcetera. No one paused to look at what the Law of State Responsibility says or talk about the conditions in which acts perpetrated by a state’s nationals can justifiably be blamed on the state. That takes nuance and when you are attacked, the adrenaline rush coupled with the desire to do politics or rake in television ratings trumps good sense and intellectual rigor.

West of West and South Asia, states are crumbling. In this region, just to Pakistan’s west, Afghanistan is teetering. Pakistan herself is grappling with the scourge of terrorism. India is fighting its own fires, though it remains much more stable and in control than either Afghanistan or Pakistan. The states in this region have their disputes and they are not going to go away anytime soon.

But one thing everyone can agree on: non-state actors are bad news all around. And no state alone can deal with them.

Look at the Pathankot attack again. If India has credible information that the attackers belonged to some group in Pakistan, then this is not just India’s problem. It is also Pakistan’s for two reasons. One, this means that those who have the capacity to attack a target in India also have the capacity to attack targets inside Pakistan. Two, their action is supra state and seeks to sabotage the state’s policy to normalize with India.

Add to this the Burns and Kahn catalytic agents theory and we have a huge problem. It is not enough to say that states are rational actors and cannot be pushed into a hot conflict, limited or broader. The history of warfare tells us that wars are often begun by rational actors miscalculating. At the least, there’s what I’d call cumulative impact. We can calculate that if less than 25 people die, it won’t be a crisis. But what is the guarantee that next time it won’t be more than the ‘acceptable’ limit?

Then there’s the minor problem of states remaining caught in the paradigm that continues to thwart efforts toward cooperation.

The only way to build trust is for India and Pakistan to cooperate. New Delhi should share its findings with Pakistan and Islamabad must act on those. Pakistan has already said this officially and that’s a good beginning. Indian TV channels, straining at the leash, will do some overall good by letting authorities on both sides deal with it maturely. Noise has a tendency of polluting the atmosphere.