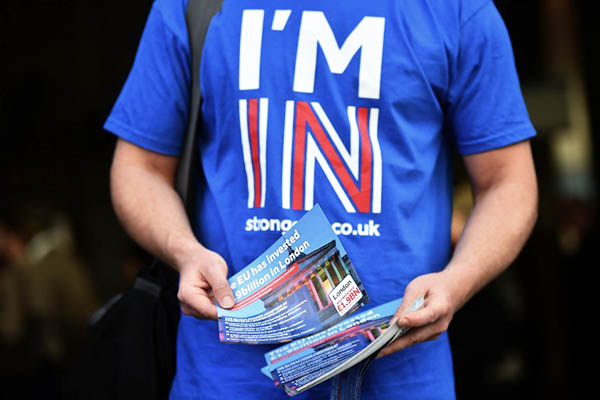 Brexit activists battle it out over U.K.’s referendum on membership in the European Union.

Politicians and world leaders have dominated the headlines in the campaign for Britain’s E.U. referendum, but a passionate battle for the country’s future is also being fought by activists on the streets.

At a stall in the bohemian London district of Fitzrovia last week, Sheila Hawkins tried to persuade workers on their lunch break that leaving the bloc in the June 23 vote would be a “disaster.”

Standing on a street corner handing out leaflets, the pensioner volunteered with the “Britain Stronger In Europe” campaign to allay her own fears of what would happen in the event of a so-called Brexit. “I was so worried, I thought—stop worrying and do something about it,” she said.

Located next to a shop selling sunglasses, the stall played blues music through a speaker and was stacked with leaflets proclaiming the benefits of the E.U. in protecting workers’ rights or tackling climate change. Hawkins set out the case for staying within the E.U. single market to Awo Davis, a 45-year-old producer, who revealed that he has yet to make up his mind how to vote.

“I’m not completely convinced by the E.U. but then again I’m not all together convinced the E.U. doesn’t work either,” he said, complaining about a lack of impartial information.

Haran, a 19-year-old student who stopped by to pick up a campaign sticker, condemned those who wanted to “Leave” out of a desire to reassert British sovereignty. They “think they’re going to find independence, but it’s all bullshit,” he said bluntly.

He repeated warnings by Prime Minister David Cameron, the Bank of England and the International Monetary Fund of the economic risks of leaving the E.U.

“Companies are going to suffer and we’re going to go into another deep recession,” he said.

But Clive Pool, 57, insisted Britain can flourish outside the E.U.—and rejected attempts to suggest the country would risk its security by going it alone.

Retired activist Jannet Taylor became quite emotional as she described the historical benefits of membership. “So you’re going to turn your back on all those who have fought for Europe over the last century, and the peace the E.U. has brought us?” she asked, her voice trembling.

“You’ve not heard of NATO? It’s nothing to do with the E.U.!” retorted Pool. He continued: “I’m voting out and I’m encouraging as many people as possible to get back to our democracy and get back to laws, made by elected representatives that we can get rid of. You don’t like David Cameron? You can get rid of him. If you don’t like [European Commission chief] Jean-Claude Juncker, there is nothing you can do to get rid of him.”

The following day, a few miles away in the south London suburb of Croydon, activists from the “Vote Leave” campaign were out canvassing in the early evening sunshine. James Bradley, a 38-year-old clutching leaflets under his arms, rang the doorbell of a modest house belonging to Desiree Peacock.

The 60-year-old opened the door with a tin of food in her hand, and, seeing Bradley’s campaign literature, cut him off as he began his introductions. “I’m leaving,” she said, before complaining about immigration from within the E.U.—which Brexit campaigners say can only be stopped by leaving the bloc—and the powers exercised by Brussels.

“It’s about losing our identity as a country. I don’t like that—I want Britain back again,” she said, a small white dog barking at her heels.

A little way down the street, a 34-year-old Polish builder, Marcin Kurdzialek, stood next to his van watching the activists with interest. He cannot vote in the referendum, but owes his job to the E.U.’s freedom of movement rules. “I would feel sorry for people who wouldn’t have the opportunities I had,” he said.