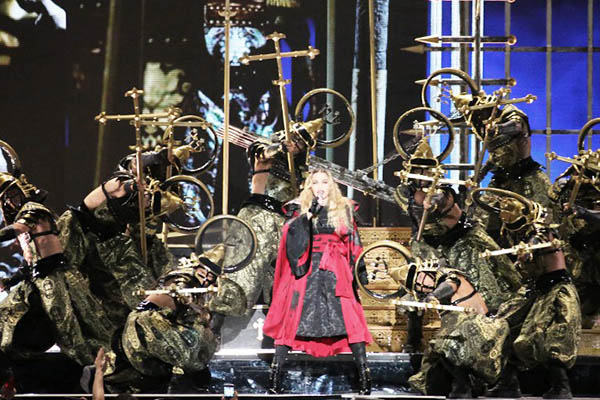 Madonna still shines on stage in new tour, but is wistful after over 30 years as pop star.

On one of the first dates of her new Rebel Heart tour, Madonna still proved her capacity to provoke and, at 57, powered lustrously through an elaborately choreographed set whose breakneck pace would daunt an artist of any age.

The show opened with Madonna descending from a cage to a procession of armored dancers inspired by both Joan of Arc and the samurai. Madonna and her dancers changed attire at a dizzying pace, as the singer assumed personas that ranged from 1920s cabaret coquette to erotically charged matador.

But Madonna also turned wistful before the audience in her adopted hometown, remembering her first time in Madison Square Garden, when she closed her blockbuster tour for Like a Virgin in 1985.

The show of emotion was rare for Madonna, who is known for her fierce professional determination and has responded defiantly after recent setbacks including online leaks of the Rebel Heart album.

Madonna has not toned down the sex on the Rebel Heart tour. She even entered the stage to a recording of her voice declaring, “I have tits and ass and an insatiable desire to be noticed.”

On “Holy Water,” dancers dressed as nuns with a transgender appearance glided up and down poles and hoisted Madonna perilously in the air. The stage then turned into a mock “Last Supper,” with Madonna as the main course tied on the table with her legs flirtatiously open.

But Madonna was ready to strip down the music as well. In one of the most emotionally resonant moments of the night, she sat alone with a ukulele and sang, in French, Edith Piaf’s “La Vie en Rose.”

The twice-divorced Madonna introduced the song by describing herself as “cynical” about marriage, stating: “I have good reason to be, but I still am a romantic at heart.”

Madonna, whose New York fan base is heavily Latino as well as gay, similarly transformed several of her giddiest ‘80s tracks—“Dress You Up,” “Into the Groove” and “Lucky Star”—into an acoustic, Spanish-tinged medley brought joyously to stage as a flamenco dance.

“This is the first time my manager told me I’m wearing too much clothing,” Madonna said at she donned a Latin floral dress.

Madonna opened the tour last week in Montreal and plans a total of 76 shows through March 27 when Rebel Heart closes in Brisbane, Australia. It is Madonna’s first tour since her 88-date global sweep in 2012 for her album MDNA, concerts that triggered frequent controversy for her outspoken commentary on issues including U.S. gun culture and Europe’s far-right.

Rebel Heart is by contrast mostly free of politics save during “Illuminati,” her toying take on conspiracy theories, in which a screen flashed sudden scenes ranging from a Ku Klux Klan rally to a gay rights kiss-in.

Madonna in recent years has accused her critics of ageism and, when she signed off, she was back to her steely self. There was no dramatic bow or prolonged encore, with her simple parting words: “Thank you, New York. We’ll be back.”