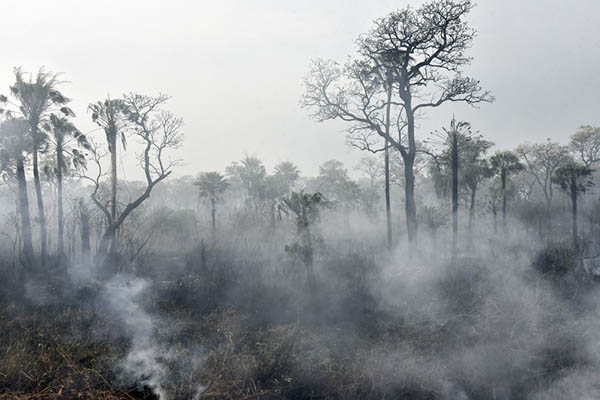 Hundreds of new fires have flared up in the Amazon in Brazil, data showed on Monday, even as military aircraft dumped water over hard-hit areas and G7 nations pledged to help combat the blazes.

Smoke choked Porto Velho city and forced the closure of the airport for nearly two hours as fires raged in the northwestern state of Rondonia where fire-fighting efforts are concentrated, amid a growing global uproar and a diplomatic spat between France and Brazil.

“In some way we’re all passive smokers,” said Sergio Pereira, head of a children’s hospital in the city where more people than usual are seeking treatment for respiratory problems. “The smoke can be really aggressive and the most affected are children and the elderly.”

Two C-130 Hercules aircraft carrying thousands of liters of water on Sunday began dousing fires devouring chunks of the world’s largest rainforest, which is seen as crucial to keeping climate change in check. Swaths of the remote region have been scorched by the worst fires in years.

Experts say increased land clearing during the months-long dry season to make way for crops or grazing has aggravated the recurring problem this year.

Seen from above, the destruction in Rondonia is dramatic: walls of flames advancing across the expansive forest beneath enormous plumes of thick smoke.

Brazil’s President Jair Bolsonaro has ordered an investigation into reports that rural producers in the northern state of Para held a “day of fire” on Aug. 10 in a show of support for the far-right leader’s efforts to weaken environmental protection monitoring.

On Monday, Brazil’s Defense Minister Fernando Azevedo e Silva claimed after meeting with Bolsonaro that the fires in the Amazon are “under control.”

“It has been exaggerated a little that the situation was out of control—it wasn’t,” he said. “The situation isn’t simple but it is under control.”

The crisis has fueled a row between Bolsonaro and his French counterpart Emmanuel Macron, who has been piling pressure on the Brazilian leader to do more to protect the forest. Macron on Monday condemned “extraordinarily rude” comments made about his wife Brigitte by Bolsonaro a day earlier. Bolsonaro hit back, accusing Macron of treating Brazil like “a colony or no-man’s land.”

The spat comes as G7 nations meeting in southwestern France agreed to spend $20 million on the Amazon, mainly to send fire-fighting aircraft. The G7 club also agreed to support a medium-term reforestation plan that will be unveiled at the U.N. in September, Macron and Chile’s President Sebastian Pinera said.

Although about 60 percent of the Amazon is in Brazil, the vast forest also spreads over parts of eight other countries or territories. Bolivian President Evo Morales said on Sunday he would accept international help to combat wildfires raging in his country’s southeast.

The country suspended election campaigning on Monday to deal with the forest fires that have swept across 950,000 hectares.

Brazil has accepted help from Israel, which offered to send an aircraft. Seven states, including Rondonia, have requested the Brazilian army’s help in the Amazon, where more than 43,000 troops have been made available to combat fires. It is not clear how many of them are actually involved in firefighting efforts so far.

After initially blaming the fires on non-government organizations, Bolsonaro on Friday changed his tune. He vowed a “zero tolerance” approach to criminal activities in the Amazon and promised strong action to control the blazes.

Bolsonaro’s delayed response came as the Amazon crisis threatened to torpedo a massive trade agreement between the European Union and South American countries, including Brazil, which had alarmed the powerful agriculture sector.

Thousands have taken to the streets in Brazil and Europe in recent days to denounce the destruction. The results of a survey conducted in the past four days show a sharp increase in Bolsonaro’s disapproval rating to 53.7 percent, from 28.2 percent in February, according to MDA Research. Only 41 percent approve of his performance, down from 57.5 percent.

Dozens of firefighters arrived in Porto Velho on Sunday and Justice Minister Sergio Moro has given the green light for the deployment of security forces to tackle illegal deforestation.

The latest official figures show 80,626 forest fires have been recorded in Brazil this year, the highest number of any year since at least 2013. More than half of the fires are in the massive Amazon basin. Some 1,113 new fires were ignited across Saturday and Sunday, according to Brazil’s National Institute for Space Research.