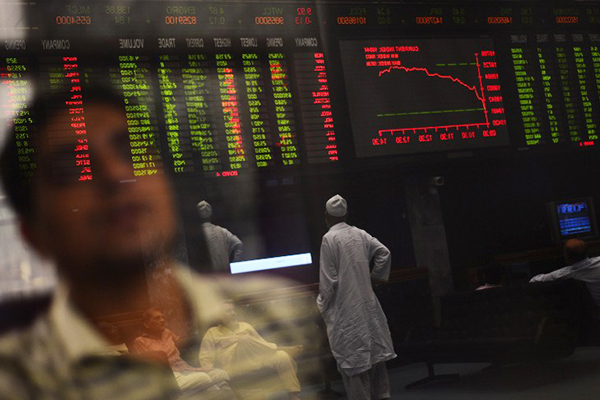 Pakistani stocks plummeted by almost three percent on Monday over fears of a crackdown on brokers by anti-corruption agencies.

The benchmark Karachi Stock Exchange index of 100 shares lost 2.67 percent or 905 points to close at 32,986 points. The index had shed 4.11 percent during last month’s international turmoil sparked by fears over China’s slowing economy, and had recovered little ground since then.

“Today the rumors about the potential arrests of stock [market]-related people intensified the panic,” said Mohammad Sohail, an analyst and the chief of Topline Securities.

Pakistani authorities have in recent months embarked on an anti-corruption drive, with former prime minister Yousaf Raza Gilani, who held office from 2008-2012, facing 24 graft charges. He was Monday granted bail in 12 of the cases after a court issued an arrest warrant for him last week.

Former petroleum minister Asim Hussain, a close aide to ex-president Asif Ali Zardari, was also remanded into the custody of the Pakistan Rangers paramilitary force over another corruption case.

Anti-corruption officials are also questioning officials of the state-run Sui Southern Gas Company, one of the exchange’s blue chips.