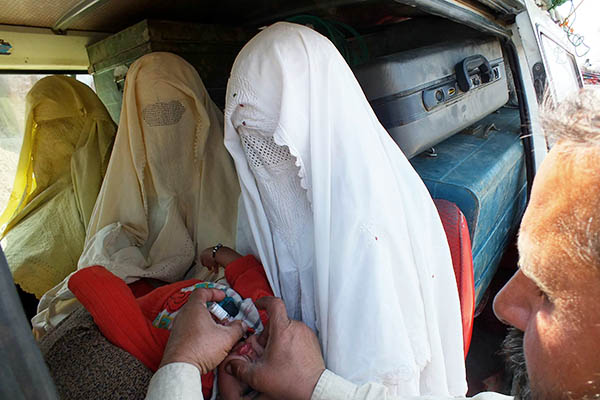 The families of foreign militants are also seeking refuge in Bannu.

On June 15, Pakistan’s military launched Operation Zarb-e-Azb in a bid to rid the North Waziristan tribal agency of foreign militants. Prompted by an attack on Karachi’s Jinnah International Airport, which was claimed by Uzbek fighters, the ongoing offensive has claimed 546 suspected terrorists, according to the ISPR. But while the military has proclaimed great success in combating the militant presence in North Waziristan, little has been said of the families they’ve left behind.

Families like Khadija Bibi and her two children. The Uzbek national moved to Pakistan’s tribal areas with her husband after he joined Al Qaeda. After he died, she turned to one of his friends for help.

“She is my sister and her children are like my own,” says Rahim Jan, 45, a shopkeeper from Miranshah who has assimilated her into his own family of five. The two families share a two-bedroom house in Bannu, with Jan and his family in one room and Khadija and her children, Ajam, 8, and Arfan, 4, in the other.

“He [Khadija’s husband] was a real jihadi,” Jan tells Newsweek. The militant, who was killed in a U.S. drone strike in the Shawal Valley region of North Waziristan a year ago, was a “close, personal friend,” says Jan, adding that it is a moral obligation to look after his family. “They are not a burden on me and, above all, they are the family members of a true jihadi who left his homeland for nothing except to wage holy war,” he added.

Khadija also praises her deceased husband’s prowess on the battlefield. “He was a skilled warrior who had strong connections with Al Qaeda,” she told Newsweek, adding, proudly: “My husband had no relations with the local militants.”

According to Khadija, the journey from Miranshah to Bannu was one of the worst of her life. Covered in a head-to-toe burqa for the entire journey, she says she was terrified—not least because this was the second time she’d had to abandon her home and seek refuge in a foreign environment. She had no identification and if anyone had recognized her as a foreigner, she could have been taken into custody. Fortunately for Khadija, and other foreigners, women in North Waziristan rarely obtain National Identification Cards. Due to the non-availability of this data, most women were allowed to pass through without any hindrance. However, she remains worried about her children, says Jan. They look like their father and she is afraid someone could recognize them.

Khadija’s story isn’t unique. Among the fleeing tribesmen from North Waziristan are dozens of foreign, and local, women who are seeking refuge in Bannu while their husbands, fathers, sons and brothers wage war on the Pakistani state in the tribal region. According to the IDPs Newsweek spoke with, many foreign militants married local women and have sent them to Khyber-Pakhtunkhwa province for safety. These women have no idea about their militant relatives’ whereabouts—or whether they are even still alive.

Another refugee, Abdul Haleem, 36, is a former resident of Mir Ali who now lives with his sister in Bannu. He says his sister was married to an Arab fighter and is the mother of three children. “Eight years ago, an Arab rented a house in our neighborhood [in Mir Ali],” he told Newsweek. He said the community had welcomed these foreigners because they were fighting the U.S. forces in Afghanistan.

“He was around my age, so I became friends with him,” he said, adding, “I thought he was a suitable candidate so arranged for my sister to marry him.” According to Haleem, his brother-in-law left to participate in the Arab Spring two-and-a-half years ago. “He kissed his children goodbye while they were sleeping and told my sister he did not know if he would ever return,” says Haleem, adding that they kept in touch via telephone for over a year but have not heard anything for a while.

Even though the militants are gone, their impact remains. Khadija’s two children swear that they will continue his “holy mission.” Eight-year-old Ajman told Newsweek: “My father is a martyr who sacrificed his life in the path of Allah. America is the enemy of Muslims.” Unable to divulge any details of his father’s jihad, Ajmas proudly declared that he had been a “skilled shooter” who often visited Afghanistan to combat U.S. forces. “I will also fight against them.”