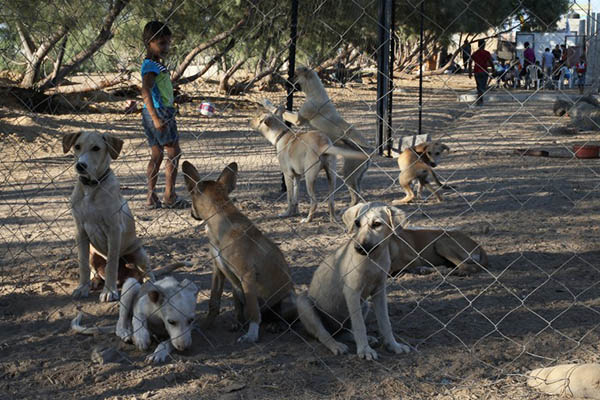 In an impoverished and war-battered territory suffering food shortages and a scarcity of jobs, Saeed al-Ar knew it was a tall order opening a dog shelter in Gaza.

The Palestinian coastal enclave crammed with 1.9 million people has been devastated by three wars against Israel since 2008, and it remains under blockade by the Jewish state and Egypt. The fate of hundreds of stray dogs outside towns or near the Israeli security fence have been anything but a priority.

“How can we create a shelter for strays when we need shelter ourselves?” is the typical view, as expressed by a 27-year-old unemployed Gazan, Jasser al-Sheikh. “We must first feed our children and find jobs for thousands of unemployed graduates.”

But Ar, a 45-year-old father of seven, has taken it upon himself to intervene, spending his own money to rescue the strays. Last month, he opened the territory’s first dog sanctuary in a relatively well-off suburb south of Gaza City.

His Al-Soulala Association for Protection, Rehabilitation and Training covers 2,700 square meters, complete with kennels that currently house around 75 former strays.

Behind beige tarpaulin on a vast sandy expanse, dogs are fed and given training to run and jump obstacles. “This is the first kennel in Palestine that supports stray dogs and domesticates them,” Ar told AFP. He used to run a police unit for dogs specializing in the detection of explosives and drugs, and admits that canines have always been his passion.

When the Islamist movement Hamas seized power in Gaza in 2007, Ar found himself out of a job. But he still collects a salary and now dedicates all his time to the dogs.

In the predominantly Muslim territory, religious authorities consider dogs to be unclean or impure. Some Gazans even shoot at stray dogs that approach their children or orchards, while others find them scary and blame them for accidents.

The authorities lack the resources even if they were inclined to intervene. In the past they even tried to poison strays, but stopped the culling over concerns that it was also dangerous to humans, a municipal official said on condition of anonymity.

The kennel aims to catch stray dogs, provide veterinary services and help domesticate them. Since it’s opening, the kennel has attracted a growing number of visitors, many of them children. Some have asked to adopt a pet, a trend picking up in Gaza.

The phone rings constantly with people reporting strays in their neighborhood. In such cases, search teams are sent out, said Mohammed al-Hindi, 24, a recently graduated nurse and one of 25 volunteer helpers.

Every morning, the volunteers tour participating restaurants and stores to collect leftover meat and chicken for the dogs, in a sign of changing attitudes in Gaza. But Ar said he has already spent $35,000 and cannot make ends meet on his own much longer.

The center needs $5,000 a month to function properly, said Ar, who has launched an online appeal to animal protection groups and lovers across the world. “We have to get help because at the moment we are doing this with our own money.”

On a brighter note, he said local authorities have promised him a larger plot of land. He dreams of a giant kennel, “with a dog food factory and a veterinary clinic for all stray animals.”