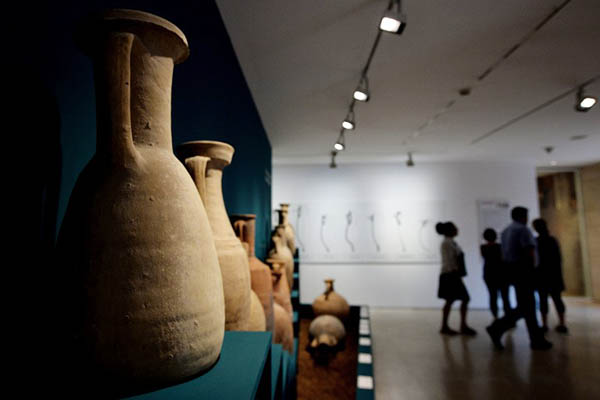 Ancient empire pioneered practice of food on the go popular the world over.

Grabbing something hot and tasty on the move? You have the ancient Romans to thank. “Street food” was their invention, generally enjoyed with wine, gambling or even prostitutes.

Food on the go was an integral part of daily life in the empire, from nibbling on salted peas while watching gladiators battle in the Colosseum, to grabbing a sausage or fried fish snack after a dip in Rome’s famed baths.

Feeding an empire of some 50 million people was no mean feat, as an exhibition in the Italian capital sets out to show in conjunction with Milan’s 2015 Universal Exhibition on the themes of food and agriculture, running until the end of October. Food scarcity could trigger uprisings or even topple leaders, a risk Emperor Augustus (63 BC to 14 A.D.) was unwilling to take. He made importing wheat, oil, wine and other foodstuffs a top priority, changing the face of Roman dining.

A typical day kicked off with the jentaculum, or breakfast—salted bread, dried fruit and eggs washed down with milk or wine. That was followed by a quick prandium, or lunch, grabbed at the thermopolia—forerunners of fast food restaurants—or popinae, wine bars frequented by the lower classes where customers could grab a bite, dabble in a bit of gambling, or pop upstairs for some sex.

And after an afternoon’s work or session at the thermal baths, the rich would throw sumptuous banquets, dining on anything from peacock tongues to baked dormice. The rest of the population supped on fresh vegetables, stews and, occasionally, meat.

“The logistics deployed by the Romans to feed themselves is fascinating,” said Orietta Rossini, curator of the Ara Pacis exhibition, emphasizing how hard it was to keep happy a capital of one million people—the biggest in history before the industrial revolution hit London.

The key lay in turning conquered Egypt into the empire’s granary and ensuring wheat was transported cheaply to Rome all year round. Private shipowners would carry up to 500 tons of wheat between Alexandria and Rome under the strict supervision of the state in an early example of today’s partnerships between the private and public sectors, Rossini said.

This made the emperor “the sole distributor of daily bread, the only one responsible for the supply of provisions.” Augustus boosted his popularity by distributing 35 kg of wheat a month free to 20,000 citizens—free men over 17 years old.

Egypt’s role was later passed on to the empire’s African provinces, with grain shipped from Carthage in Tunisia to Rome’s Ostia port in just three days and nights. Wine, sold at rock-bottom prices, was also imported, along with oil and meat.

The wealthy may have gone out of the way to impress with exotic dishes, but the empire’s leaders were fond above all of fruit and vegetables: Emperor “Tiberius loved cucumber, while Augustus loved asparagus,” Rossini said.

Samples of carbonized foodstuffs discovered during excavations at the ancient town of Herculaneum, destroyed along with Pompeii by the eruption of Mount Vesuvius in A.D. 79, are on display at the exhibition, including wizened Roman-era figs.

The much-lauded “Mediterranean diet” began here: broad beans, peas, lentils and onions went in stews, with pine nuts, dates and almonds thrown in. Cumin, coriander, sesame and mint seeds were used to spice up dishes. The globalization of foodstuffs seen in today’s supermarkets was already in action, with wine imported from Gaul and Cyprus, oil from Andalusia, honey from Greece and prized garum—the fermented fish sauce which drove Romans crazy—from Portugal.

Food was such an important commodity that Emperor Diocletian, who ruled from 284 to 305, imposed price controls. But some dishes remained beyond the household budget for some—with chicken a particularly expensive and rare treat.

While a baker would on average earn 50 pieces of silver a day, he would have to spend 60 to buy two chickens, 30 for a half a liter of Falernian wine from the Bay of Naples, 12 for 300 grams of pork and four for 25 figs.