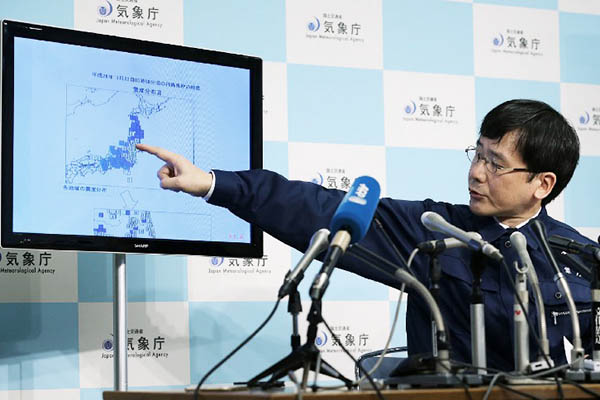 No signs of major damage or injuries, but residents recall panic of 2011 quake that left over 18,500 people dead or missing.

A powerful 6.9-magnitude earthquake hit northeastern Japan on Tuesday, triggering tsunamis along the coast including a one-meter wave that crashed ashore at the stricken Fukushima nuclear power plant.

National broadcaster NHK urged residents in the region to “flee immediately” to high ground, reminding listeners to heed the lessons of the “Great East Japan Earthquake.”

A massive undersea quake that hit in March 2011 unleashed a tsunami that left more than 18,500 people dead or missing, and sent three reactors into meltdown at the Fukushima Daiichi power plant in one of the world’s worst nuclear disasters. An official from plant operator TEPCO told a news conference that a one-meter wave had hit the coast at the facility, but a spokesman for the company told AFP there were no reports of damage.

TEPCO earlier reported that a water cooling system at a reactor in the separate Fukushima Daini facility had briefly stopped in an automatic response, but that it was back up and operating. “The biggest risk now is a case whereby contaminated water is carried away with the tsunami, which pollutes the environment,” TEPCO’s chief decommissioning officer Naohiro Masuda said at the televised press conference in Tokyo.

Several other tsunami waves, the biggest measuring 1.4 meters, hit elsewhere on the northeastern coast, according to NHK, but they were smaller than initial warnings of waves as high as 3.0 meters.

NHK aired rolling coverage on the earthquake, with the words “Tsunami! Flee!” written in white lettering over a bright red band in the middle of the screen.

No signs of major damage were immediately evident from television images, and authorities reported a small number of light injuries, but residents along the coast were badly shaken. “It was huge and lasted so long,” Akemi Anzai, from the city of Minamisoma, which lies north of the Fukushima plant, said of the quake. “The tsunami siren warning can be heard from the coastline,” she told AFP. “The ground is still shaking. I’m so scared. But my concern is rather the situation at the nuclear plant.”

The United States Geological Survey said the 6.9 magnitude quake, at a shallow depth of 11.3 kilometers, struck shortly before 6:00 a.m. in the Pacific Ocean off Fukushima. The powerful quake also shook buildings in Tokyo, which lies about 230 kilometers to the south.

Japan’s Meteorological Agency, which estimated the quake’s magnitude at 7.4, downgraded its tsunami warning from an “alert” to an “advisory” although still urged caution along coastal areas.

Shinkansen bullet train services were temporarily suspended in the region and Sendai airport in Miyagi, north of Fukushima, was closed. Authorities said that a total of six people were lightly injured including five in Fukushima prefecture and one in Chiba prefecture east of Tokyo, while two other people were hurt in Miyagi prefecture.

The national disaster management agency said there was a minor fire at a laboratory in Fukushima but that it was quickly put out. NHK showed footage of what appeared to be seawater flowing up a river in Miyagi prefecture though none of it surged beyond the river’s banks.

Some evacuees took to Twitter to express their fears. “I’m at a cultural center where I evacuated during the previous disaster [in 2011],” one person tweeted in Japanese. “This reminds me of that.”

Speaking during a visit to Argentina, Prime Minister Shinzo Abe directed the government to work with authorities in the affected areas. He said he had ordered his cabinet to “assess damage and do their utmost to cope with the disaster.”