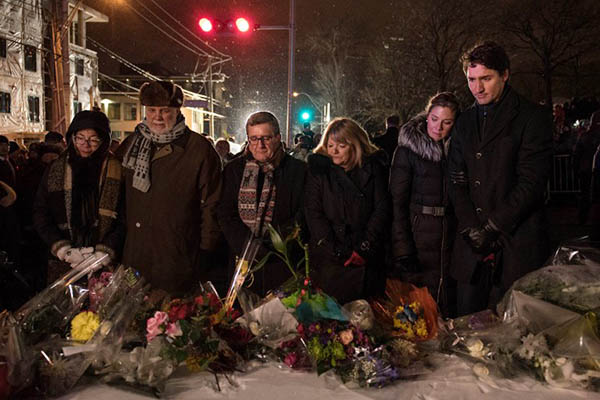 Police say they hope to gather evidence that will allow them to indict man with terrorism and national security charges.

A Canadian political science student known to have nationalist sympathies was charged on Monday with six counts of murder over a shooting spree at a Quebec mosque—one of the worst attacks ever to target Muslims in a western country.

Prime Minister Justin Trudeau condemned as a “terrorist attack” Sunday night’s assault on the Islamic Cultural Center in a busy district of Quebec City, which sent terrified worshippers fleeing barefoot in the snow.

Eight people were also wounded in the crossfire, and five of them remained in critical condition in hospital on Monday.

Alexandre Bissonnette, who made a brief court appearance after surrendering to authorities, was charged with six counts of premeditated murder and five of attempted murder, police said. More indictments are expected later, police added.

“There are search warrants underway,” a spokeswoman for the Royal Canadian Mounted Police told a press conference. “We hope to obtain the evidence to reach the point where we will be able to lay terrorism and national security charges,” she said.

So far, authorities have shed no light on what may have prompted the attack.

Both police and witnesses had initially described two masked men opening fire inside the mosque, where worshippers were gathered for evening prayer. But authorities said on Monday that a second person detained had only been questioned as a witness.

Explaining how one suspect was eventually let go, the RCMP said: “This morning and last evening we had reason to believe that two individuals should be arrested, that two people had participated.” After investigating, they said: “we reached the conclusion that we should focus on one single suspect. And there was no reason to believe that the other individual had participated.”

Some 50 people were in the mosque at the time of the attack. The dead are all dual Canadian nationals: one Moroccan, two Algerians, one Tunisian and two Guineans.

Bissonnette, who is a student at Laval University, surrendered 20 kilometers outside the city after calling an emergency services hotline an hour after the attack to reveal his location. “It is a domestic investigation at this time,” Royal Canadian Mounted Police Inspector Martin Plante said.

Public Safety Minister Ralph Goodale said the nation’s security threat level remained at medium—requiring security forces to be on guard but having no specific information about an imminent threat. It was raised to this level in October 2014 after a lone gunman attacked parliament.

Police are continuing to collect evidence in a bid to “identify exactly who is involved and what was their motivation,” Goodale said. Authorities, he added, don’t have “sufficient, hard facts yet to be able to draw conclusions.”

The Quebec mosque had already been the target of hate: a pig’s head was left on the doorstep last June during the Muslim holy month of Ramzan. Other mosques in Canada have been targeted with anti-Muslim graffiti in recent months.

Police stationed near the mosque told AFP that they had feared this type of attack “because it’s happening all over the world.”

The shooting came as Canada vowed to open its arms to Muslim refugees after Trump’s controversial immigration ban prompted travel chaos and outrage around the world. “Last night’s horrible crime against the Muslim community was an act of terror committed against Canada and against all Canadians,” Trudeau said.

To the one million Canadians who profess the Muslim faith, he said “36 million hearts are breaking with yours,” alluding to the country’s total population. “Canadians will not be intimidated,” Trudeau added. “We will not meet violence with more violence. We will meet fear and hatred with love and compassion.”

Trump telephoned Trudeau to offer his condolences following the attack, which was condemned around the world including by leading Sunni Muslim body Al-Azhar, as well as Egypt and Jordan.

Mohamed Ali Saidane, who lost a relative in the shooting, joined elected officials at city hall on Monday to denounce escalating hate. “The Arab-Muslim community has become the victim of populist politics,” he told AFP.

People fleeing the mosque did not have time to collect their winter boots. “They arrived in a panic,” said Louis-Gabriel Cloutier, the manager of a café across the street who saw them fleeing the rampage. Some took refuge at the café.

“I never thought that such a thing could happen,” said a man who frequents another of the city’s 10 mosques. He had ventured to the scene because “I know people who were inside.”

Hamid Nadji learned of the shooting from a friend and rushed to the mosque area. “For us Muslims, Quebec and Canada had been a safe zone,” he said.

Very sad to see innocents being killed, because they belong to a certain faith.
Once again, it is innocents who are targeted. Because it’s easy to kill unarmed men, women and Children.?
Shame on all such killers / terrorists.