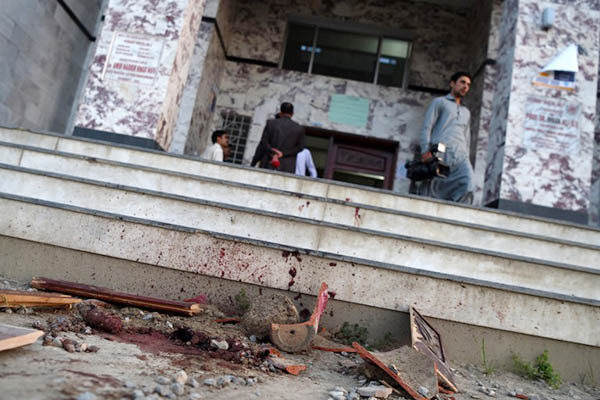 Hundreds of students were involved in incident, according to police.

Hundreds of students beat to death a classmate known for his liberal views on a university campus in Khyber-Pakhtunkhwa province on Thursday, police and witnesses said.

Mashal Khan, a journalism student, was stripped, beaten, shot, and thrown from the second floor of his hostel at the Abdul Wali Khan university in Mardan, sources at the university said. Graphic video footage from the scene shows dozens of men outside the hostel kicking and hurling projectiles at a body sprawled on the ground.

The killing comes as authorities, including Prime Minister Nawaz Sharif and interior minister Chaudhry Nisar Ali Khan, have been increasingly vocal over blasphemy in recent weeks. Blasphemy is a hugely sensitive charge in the Muslim-majority country, and can carry the death penalty. Even unproven allegations can cause mob lynchings and violence.

“The student has been brutally murdered by his fellow students,” said Niaz Saeed, a senior police official. “He was badly tortured after being shot at a close range… He was beaten with sticks, bricks and hands,” Saeed said, adding that hundreds of people had been involved in the attack.

At least 11 students have been arrested so far, police said, and the university was closed indefinitely, with the campus largely deserted late Thursday evening. “We are investigating the case but at this stage we cannot say anything” about the motive for the attack, Saeed said

However a police source told AFP that students had recently complained to university authorities about Khan’s alleged secular views. The source said Khan and two friends had been in a debate with other students earlier Thursday about his religious views, which became so heated that teachers had to lock him in a room for his safety. “But the enraged students grew to a mob and they attacked the room,” the source said.

A university official who spoke on condition of anonymity confirmed teachers had been forced to intervene in the debate “in a bid to save him and his two other friends, but the mob of students attacked the room and tortured and killed him.” Khan was “disliked by other students for being liberal and secular and not following a religious code of life and not attending Friday prayers,” the official said.

Last month, Prime Minister Nawaz Sharif ordered blasphemous content be removed from social media, and perpetrators punished. The interior ministry also threatened to block all social media websites with blasphemous content, and said Facebook was sending a delegation to Pakistan to discuss their concerns, although Facebook would not confirm that to AFP.

Rights groups have long criticized Pakistan’s colonial-era blasphemy legislation as a vehicle for personal vendettas. At least 65 people have been murdered by vigilantes over blasphemy allegations since 1990, according to recent think tank report issued before Thursday’s killing. Activists have also accused religious conservatives of using blasphemy as a means of muzzling dissent.

Islam once again showing its’ peaceful side!

To train humans what to think and not how to think is a crime against humanity — and is the goal of all dictatorships be they political or clerical.

This has nothing to do with the religion of peace.

It has everything to do with the “religion of peace” which doesn’t even mean ‘peace,’ it means when all submit to Allah there will be peace…a metaphorical peace since Muslim countries don’t even have peace. The reason they killed him is stated. There have been several killings by fanatics like these people who falsely accused others of blasphemy. What part of blasphemy laws in Islam do you not get? Secularists are getting get in Bangladesh often now, bloggers, atheists, and areas of Pakistan have violent books in public schools and in other countries like Saudi Arabia. Thousands of imams preach hateful things about non-Muslims and other Muslim sects.

It is spreading as they copycat these behaviors and the hardline groups in Pakistan encourage it. To pretend it doesn’t have to do with Islam and systemic and endemic problems because of it is a lie and denial. They can use the Qur’an as a reason since the Qur’an has verses to kill non-Muslims.

We have crime in the US but not because religious people are killing secularists and speak their mind. Islamists kill people over words, ideas, insults, or anything they perceive as anti-Islam. A man in Pakistan (I have to look up his name) wants to reform the blasphemy laws and the hardline groups who have some political clout accused of him of blasphemy against blasphemy laws. He has gotten death threats. His father who advocated for the same thing had been murdered. Way too much hate of other people is taught in the Islamic world and is now being done in non-Muslim countries due to migration…a problem that didn’t exist most of my life. Then people ridiculously call people Islamophobics when they have every right and reason to not like Islam, sharia law, etc.