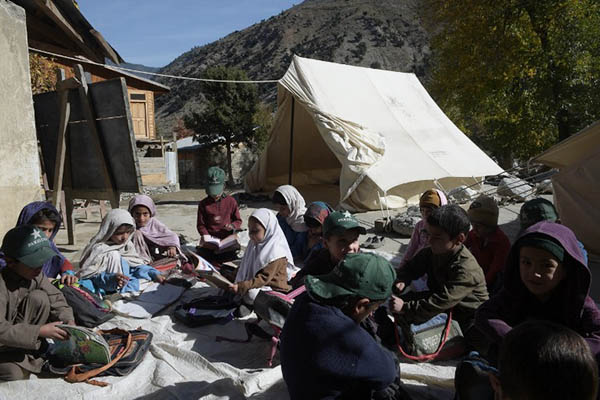 Education halted in Khyber-Pakhtunkhwa, as quake leaves buildings in ruins.

Ishtiaq Khalid is having a snow day, forced to stay home from his school in Shangla due to inclement weather. But unlike most 12-year-olds, he is not happy about it.

Last month a powerful earthquake destroyed 200 schools and damaged hundreds more in Pakistan’s northwest, including Ishtiaq’s, leaving thousands of shivering children to study without shelter under wintry skies. It is a massive setback in an area that has not yet been able to rebuild the schools destroyed in an even more devastating quake a decade ago, and where more than a quarter of primary school age children already do not attend classes.

Engineers have declared the damaged schools too dangerous to study in, saying any aftershocks or further tremors could be “disastrous.” Another 5.9-magnitude quake shook the region late Sunday, and while no major damage was reported, it underscored the point.

“We have been warned because of the fear of aftershocks,” said Ishtiaq, who is in the fifth grade at his school in Lelonai village in Shangla district of Khyber-Pakhtunkhwa province.

Parts of his school were reduced to rubble in the 7.5 magnitude quake that ripped across Afghanistan and Pakistan on Oct. 26, killing nearly 400 people. Authorities reopened the school five days after the tremor—but students were not allowed inside, forced to study under the open sky in a courtyard. Just days later, rain and snow saw officials cancel classes once more.

“We were happy with the reopening despite attending the classes under open sky and siting on ground,” Ishtiaq told AFP. But now, he says, it is getting colder, and the government has only issued one tent for his entire school. The teachers can fit inside, he said, but the students cannot.

“It’s very hard to sit without a roof in this cold… the number of students is continuously dropping.”

Officials in Khyber-Pakhtunkhwa said last month’s quake completely destroyed 200 schools and damaged some 2,000 more, with preliminary assessments suggesting that up to 8,000 children could be affected. And with cold weather settling in, they may have to close the schools entirely days before the official start of the winter break.

“The situation is not good,” Qaisar Alam, a senior education official in the area, admitted nearly a month after the tremor. “We are not using the school buildings even with partial damage… Vacation may be announced a week earlier.”

The holiday will last until February as usual, but it is not clear whether the damaged schools can be rebuilt by then.

Most of them were in the mountainous districts of Shangla, Upper and Lower Dir, and the scenic Swat valley, where schools destroyed during the Taliban’s brief 2007-2009 rule are also being rebuilt. Some schools were in far-flung villages on remote hilltops where mules are the primary form of transport, making reconstruction especially difficult.

Authorities said the recent earthquake had compounded their fears for education in the province where they are still struggling to reconstruct 760 schools destroyed in the 2005 disaster, which killed more than 75,000 people and displaced some 3.5 million. “We were planning a phase-wise arrangements to re-rebuild those 760 buildings… but the recent quake completely destroyed 200 more,” Alam told AFP.

The slow progress does not bode well for the future of Ishtiaq’s education. A decade on, thousands of students are still making an arduous commute to schools in other villages or studying in rented buildings, while some have been provided with big tents in which to hold classes, Alam said.

In the village of Shahpur, another student, Abuzar Khan, described huge cracks that appeared in his school building during the quake. “We are worried. We keep the school bags in rooms and then take classes in the courtyard, under open sky,” the seventh-grader told AFP.

Idrees Mehmood, meanwhile, is luckier: when part of his school in Upper Dir district was destroyed by a landslide in the quake, local authorities managed to rent another building for them. A solid structure might be helpful, but Mehmood pointed out, “we have no desks and sit on the floor.”