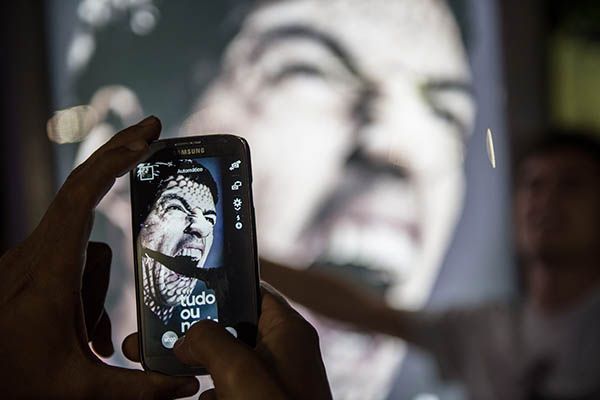 Uruguay player will miss the rest of the World Cup and the start of the Premier League season.

Uruguay star Luis Suarez exited the World Cup in shame on Thursday after being hit with the heaviest suspension in the tournament’s history for biting an Italian opponent.

Suarez, who bit Italian defender Giorgio Chiellini during his team’s Group D win on Tuesday, was slapped with an immediate worldwide four-month ban and fined 100,000 Swiss francs. “Such behavior cannot be tolerated on any football pitch, and in particular not at a FIFA World Cup when the eyes of millions of people are on the stars on the field,” said FIFA Disciplinary Committee chief Claudio Sulser.

Football’s governing body imposed a four-month ban on all football activities, a nine-game international ban and the fine. The punishment took immediate effect, meaning Suarez misses Uruguay’s second round match against Colombia on Saturday in Rio de Janeiro. It will also hit his club career with Liverpool in England’s Premier League, as he cannot play until the end of October. The nine-match ban is also likely to rule Suarez out of Uruguay’s defense of the Copa America in 2015.

The sanction was the toughest ever handed down for foul play at a World Cup, surpassing the eight-match ban against Italy’s Mauro Tassotti in 1994 for elbowing Spain’s Luis Enrique. It is the third time Liverpool star Suarez has been banned for biting players following incidents in 2010 in the Dutch league and 2013 in England. He also received a long ban in 2011 for racially abusing Manchester United’s French international Patrice Evra.

Uruguay football officials, who insisted Suarez had not bitten anyone, said they planned to appeal, describing the punishment as “totally exaggerated.”

The country’s Sports Minister Liliam Kechichian also railed against the verdict. “This disproportionate sanction hurts us,” she said on Twitter.

But the speed and severity of FIFA’s punishment reflected the widespread revulsion throughout the football world at an incident captured clearly on television footage. FIFA had faced mounting calls to issue a heavy sanction given Suarez’s previous disciplinary history.

Suarez’s sponsor Adidas responded to the punishment by saying it “fully backs” FIFA’s decision. The company said it was dropping Suarez for all campaigns during the World Cup.

“We do not accept the recent behavior of Luis Suarez and shall remind him of the high standards we expect of our players,” an Adidas spokeswoman said.

Suarez was also ordered to leave his team’s hotel after his accreditation was revoked. He was reported to be heading back to Montevideo, where crowds of flag-waving spectators had gathered at the city’s international airport.

On the pitch, Germany and the United States clinched their places in the last 16 at the expense of crisis-hit Ghana and Cristiano Ronaldo’s Portugal. Thomas Mueller’s long-range effort was enough to clinch a 1-0 win for Germany in a rain-soaked affair in Recife. The Americans joined the Germans in the last 16 as the runners-up from Group G after the result in the game between Ghana and Portugal went in their favor.

United States coach Jurgen Klinsmann praised his team for defying the odds to advance to the second round. “It’s huge getting out of this group,” said Klinsmann. “Everybody said ‘You have no chance’ but we took our chance and now we move on and we really want to prove a point.”

Real Madrid superstar Ronaldo struck a late volley to give Portugal a 2-1 win that left them level on four points with the United States. But Portugal’s inferior goal difference—a result of their disastrous 4-0 opening defeat to Germany—always left them struggling to pip the Americans.

Ghana’s chaotic World Cup came to an end hours after revelations of turmoil inside the African giant’s camp. The Ghana Football Association said star players Sulley Muntari and Kevin-Prince Boateng had both been axed from the squad after a bust-up with team officials.

The suspension came one day after the Ghana government said it was airlifting $3 million to Brazil to resolve a financial dispute with players, who boycotted training Monday. In later games, Belgium clinched first place in Group H after beating South Korea while Algeria reached the last 16 for the first time after drawing 1-1 with Russia.