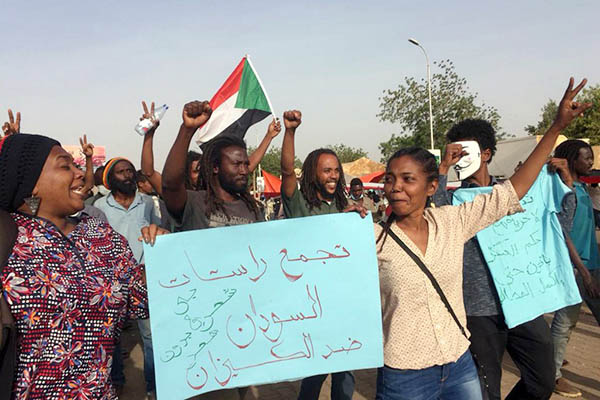 Sudanese protesters angry that army commanders have taken control after removing veteran president Omar al-Bashir in a palace coup defied a night-time curfew to keep up four months of mass demonstrations on Friday.

Protest leaders dismissed the transitional military council formed by top brass after they toppled Bashir on Thursday, as the “same old faces” from the old regime, which had ruled the country with an iron fist for three decades.

Demonstrators demanded a civilian body to lead the transition to democracy and bring an end to the multiple conflicts, which have pushed the country into worsening poverty. Most shops and offices were closed on Friday, which is the day of prayer and rest in Sudan.

Vast crowds were expected to throng the streets of Khartoum and its twin city Omdurman after the main weekly Muslim prayers at noon raising fears of confrontation.

Washington called on the military council “to exercise restraint and to allow space for civilian participation within the government.” The European Union urged the army to carry out a “swift” handover to civilian rule.

Sudan’s last elected prime minister, opposition Umma party leader, Sadiq al-Mahdi, who was overthrown by Bashir in a military coup in 1989, was expected to address supporters after prayers at one of Omdurman’s most revered mosques. Since returning to Khartoum from self-imposed exile, Mahdi has allied his party with the grassroots who were the driving force behind the mass protests that preceded Thursday’s coup.

The Sudan Professionals Association—a well-organized umbrella group of doctors, teachers and engineers—has called for a huge turnout at Friday’s turnout as has the wider opposition Alliance for Freedom and Democracy.

Despite warnings from the new military council to respect the nighttime curfew, the soldiers posted outside army headquarters made no move to disperse the protesters who camped out there for a sixth straight night on Thursday, demonstrators said.

Protesters were seen chatting with soldiers. They said their quarrel was with the commanders who had led the coup, not the rank and file. “There was no difference between last night and previous days and nights for us,” said one protester who gave his name as Abu Obeida. “This is now our square. We have taken it and won’t leave until victory is achieved. We broke the curfew. We will continue doing it until we have a civilian transitional government.”

Ibnouf said a transitional military council would replace the president for two years, adding that the country’s borders and airspace were shut until further notice. He said the council was also imposing a 10 p.m. to 4 a.m. curfew.

State television later broadcast footage of him taking the oath to become head of the council, alongside his new deputy, army chief of staff Lieutenant General Kamal Abdelmarouf. State television said there would be a fresh announcement from the military council on Friday.

Bashir, who swept to power in a 1989 coup, was one of Africa’s longest-serving presidents and is wanted by the International Criminal Court (ICC) on charges of genocide and war crimes.

Ibnouf apologized for “the mismanagement, the corruption and the injustice” that had led to mounting social inequality. He also apologized for the regime’s resort to strong-arm tactics to attempt to crush the protests which had led to the “loss of people’s lives.” But his apology fell on deaf ears among the protesters, who had repeatedly defied bullets and tear gas to keep up their sit-in before the army stepped in.

Thursday’s announcement meant “we have not achieved anything,” said another protester who gave his name only as Adel. “We will not stop our revolution. We are calling for the regime to step down, not only Bashir.”

It was a far cry from the scenes of celebration that had initially greeted the army’s announcement it would intervene on Thursday, when demonstrators cheered and hugged soldiers on the streets, some of whom joined the demonstrations.

The opposition Sudanese Congress Party called for the establishment of a joint military and civilian council to rule for a four-year transitional period. It also urged the army to give executive powers to civilians.

U.N. chief Antonio Guterres called for a transition that would meet the “democratic aspirations” of the Sudanese people and appealed for “calm and utmost restraint by all,” his spokesman said. That came after the African Union decried Bashir’s military ouster, saying it was “not the appropriate response to the challenges facing Sudan and the aspirations of its people.”

The military council said it was declaring a ceasefire across the country, including in war-torn Darfur. But the rebel Sudan Liberation Army (SLA-AW) fighting government forces in Darfur denounced what it called a “palace coup.”

Sudan’s feared National Intelligence and Security Service (NISS) said it was freeing all the country’s political prisoners, state media reported. But in the eastern cities of Kasala and Port Sudan, the releases failed to materialize, prompting protesters to storm NISS buildings, according to witnesses.

Protesters have otherwise largely heeded the calls of organizers to refrain from attacking government official or buildings as they press their campaign for sweeping reform.