Sufis Live in Fear in Bangladesh 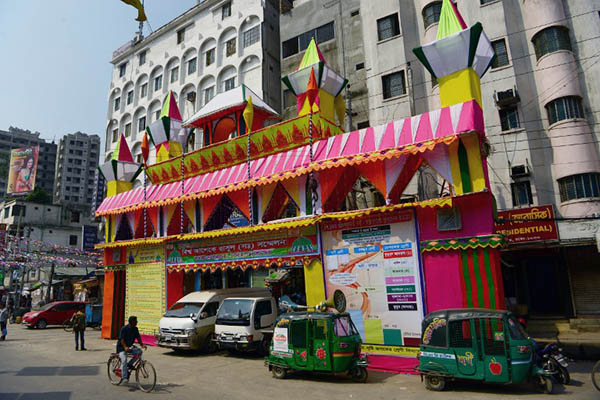 Decorations in Dhaka for an annual Sufi congregation. AFP

Each time he hears of the latest deadly machete attack, Ashraful Islam can’t help but think of his father’s gruesome murder and fear his fellow Sufi Muslims will never be safe again in Bangladesh. “The killings are not declining, they’re getting worse. And every one reminds me what happened to my father,” said the 30-year-old medical student. “I’ve no idea why they are doing this but if they aren’t stopped then our future is doomed, we’ll become another Pakistan.”

Islamists have claimed responsibility for around 40 killings in the last three years of foreigners, secular bloggers, gay activists, Hindus and Christians. Many have been slaughtered with machetes. But no group has suffered as much as Sufis, an offshoot of mainstream Islam whose followers are often denounced as “infidels” for their mystical traditions, including worshipping at shrines.

More than 100,000 Sufis are expected in Dhaka Friday to attend an annual congregation, which this year is both a celebration and an act of defiance. It comes less than a month after local Sufi leader Mohammad Shahidullah was found hacked to death under a mango tree in Rajshahi district.

The deep wounds in his neck echoed Khan’s murder last October when he was killed by suspected members of banned Islamist militant group Jamayetul Mujahideen Bangladesh (JMB). Khan had around 2,000 followers, many of whom would turn up at weekly prayers at the family home in Dhaka.

On the night of his killing, he had arranged to meet prospective tenants for a vacant apartment underneath the family’s own flat. But he went downstairs to an ambush by a gang who cornered him in a bathroom and then hacked at his neck until he bled to death.

The killers then burst into the upstairs living room, tying up Khan’s family, who later managed to escape.

“It was my mother who discovered the body in the bathroom. The head was partially severed. It was such a shocking thing. Every now and then my mother still breaks down.”

Police soon arrested five suspects who allegedly told investigators it was their “religious duty” to kill Khan. No one has yet been convicted for the killing and there have been few arrests in the other murders.

Most have been claimed by the likes of JMB or international jihadists such as the Islamic State or Al Qaeda’s South Asia wing.

While more than 90 percent of Bangladesh’s 160 million population are Muslims, it is an avowedly secular state. For most of the first four decades after winning the 1971 independence war with Pakistan, Bangladesh had a reputation for religious tolerance and Sufi Muslim services drew tens of millions of worshippers.

But Islamist groups, discredited by their war-time allegiance to Pakistan, grew in strength over the decades. The largest Islamist party, Jamaat-e-Islami, became a key ally of the mainstream opposition before being banned by Prime Minister Sheikh Hasina in a move critics say pushed its followers towards extremism.

Mubashar Hasan, an expert on political Islam, said Bangladesh’s fate was familiar to other Muslim-majority countries where extremists have tried to impose a very narrow form of religion. “Pakistan, Egypt and Iraq are facing similar problems,” said Hasan from Dhaka’s University of Liberal Arts.

He urged Hasina’s government to co-opt Islamic scholars to join a campaign “to delegitimize religious justification of violence and terrorism carried out by these extremists.”

There is a widespread fear that youths struggling to find work in an impoverished country are being radicalized in madrassahs. “These militants tend to be half-educated or illiterate and become brainwashed,” said Rezaul Haq Chanpuri, an activist from a prominent Sufi family. “There is a section of the country which believes these militants and the clerics who preach Salafi-Wahabi Islam represent the rightful path while Sufis are deviants.”

A Dhaka-based Sufi, who has more than 100 followers, said he had adapted his services to avoid becoming a target. “I am now using Quranic verses that are popular among Salafi-Wahabis so they can’t brand me a deviant,” he said on condition of anonymity.

Self-styled Sufi king Hazrat Dewanbagi, who is hosting Friday’s congregation, now deploys heavy security around his inner sanctum, which once was open to all.

Ashraful Islam admits being scared but won’t reject his heritage. “My father taught me that tolerance is true to the nature of Islam and it is others who have veered off the rightful path,” he said.