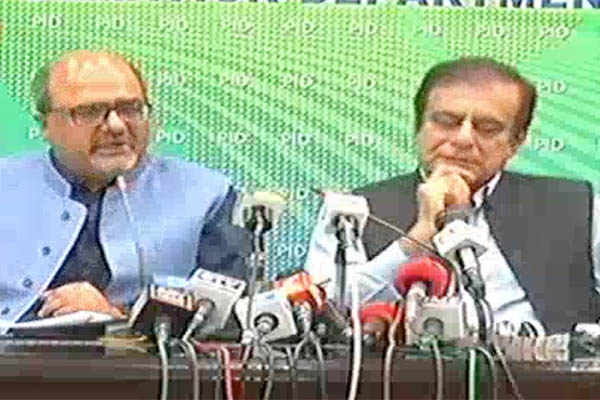 Publicizing the findings of an inquiry commission into a sugar crisis that hiked prices nationwide last year, the P.M.’s Aide on Accountability Shahzad Akbar on Thursday said the report had found that sugar mill owners were perpetrating the twin injustices of inflating cost of production and market manipulation.

“There are two injustices—inflated cost of production and market manipulation—being done against the people,” he said, adding that there was also accounting fraud. “The report also showed that mill owners are maintaining two account books. There is an under-reporting on sugar procurement of 25-30 percent, which is an absolute scandal. Tax is not paid because of this,” he said.

Addressing a press conference with Information Minister Shibli Faraz and P.M.’s Political Aide Shahbaz Gill, Akbar hailed the release of the report as an ‘unprecedented’ event, claiming no previous government had ever had the courage to release such inquiries in the past.

The government set up the sugar inquiry commission to determine why sugar prices had risen by 33 percent from December 2018 to August 2019. “In view of the rise in prices, the premier set up a three-member inquiry committee under Federal Investigation Agency Director General Wajid Zia and which presented a detailed report to the prime minister, wherein problems associated with the sugar industry that were causing price hikes were highlighted,” he said.

“The prime minister in his 22 year struggle has reiterated one thing over and over, which is that when a person doing business comes into politics, then they would do business in politics as well. At the expense of the public,” he said, claiming the report validated this view, as a business group had captured the whole industry, placing the ultimate burden of its actions on the people.

Akbar claimed the commission had audited the Al-Arabiya Sugar Mills owned by Salman Shehbaz Sharif, finding it was involved in “a fraud of Rs. 400 million through informal receipts and market manipulation.” Additionally, he said, the company was engaged in “double reporting.”

Akbar said the JDW Sugar Mills, in which Jahangir Tareen owns 21 percent shares, was found guilty of “double billing” and “over-invoicing” as well as “corporate fraud.” It under-invoiced sales from bagasse and molasses, which resulted in 25 percent cost inflation, said Akbar.

Of Minister Khusro Bakhtiar’s brother Omar Shehryar, he said the two were separate individuals. “We cannot ask Khusro Bakhtiar to resign from his post before an investigation. An inquiry will be initiated against whoever is directly involved,” he added.

The audit of Alliance Sugar Mill, in which PMLQ leader Moonis Elahi has a 34 percent stake, cut amounts paid to farmers by 11-14 percent between 2014 and 2018, he said, terming it a “huge blow” to farmers.

According to Akbar, a subsidy of Rs. 29 billion was given to the sugar industry in the last five years, while they paid Rs. 10 billion in income tax after getting a tax refund.

Akbar said the report “has some very shocking findings,” from sugarcane procurement and sugar manufacturing to sale and exports. “The first finding which is important in this report is that the farmer, the person who grows sugarcane, was consistently harmed and was looted. Sugar mills systematically paid extremely low prices, lower than even the support prices,” he said, noting that the support price had been set at Rs. 190, but farmers were paid only Rs. 140.

He said almost all mills also reduce sugarcane weight by 15-30 percent, thereby paying farmers less. He also said that many farmers were given unofficial receipts, which showed them being paid even less than Rs. 140.

“Mill owners show cost of production as higher than support price when, in reality, the commission has obtained evidence through the forensic audit which shows sugarcane is purchased on lower prices and farmers are paid lower prices,” he said.

“A major finding is manipulation in cost. Ex-mill cost, which is the cost of production was a major point determined by the commission,” he said, noting that no previous government had undertaken an independent assessment of cost of production of 1 kilogram of sugar.

Giving some examples, he said the cost of production for 2017-18 provided by the sugar mills was Rs. 51/kg, while the forensic audit had determined it was actually Rs. 38. “Similarly, the cost of production for 2018-19 determined by the sugar mills association—which is done by the mills themselves—was Rs. 52.06, whereas the forensic audit commission determined it as Rs. 40.06.”

Defending Punjab Chief Minister Usman Buzdar’s granting of a subsidy to mill owners last year, Akbar said the administrator had been under pressure from the “sugar mafia” to grant the subsidy or risk a shortage. He did not make much mention of Planning Minister Asad Umar, who allowed the Economic Coordination Committee to export sugar while the country was facing a shortage.

Referring to Sindh, he claimed the subsidy “was tailored to benefit Omni Group.”

To a question, Akbar said the government would determine which investigative agency was best suited to probe and take action against the mills found committing illegal actions.

Shortly after the press release, Tareen said he was he was “shocked at the false allegations” leveled against him. In a posting on Twitter, he claimed he did not maintain two sets of books and paid all taxes, adding that he would “answer every allegation and be vindicated.”

Separately, Moonis Elahi also posted on Twitter that he was not involved in the management of any sugar mill. “I strongly support the recommendation of commission to control satta/speculation, including new legislation to help government control sugar price manipulation,” he said.

Meanwhile, PMLN President Shahbaz Sharif told a private broadcaster the entire report was an “eyewash and a cover-up job to save the skin of the real culprits of this scandal Prime Minister Imran Khan, his cabinet and Punjab C.M. Usman Buzdar and his cabinet.”