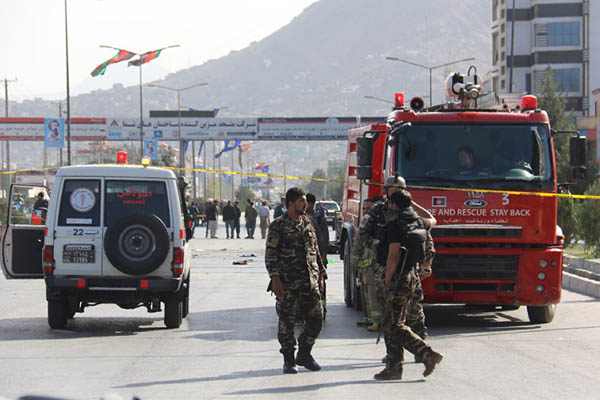 A suicide bomber on a motorbike blew himself up near a convoy of gunmen commemorating the death anniversary of a famed resistance leader in Kabul on Sunday, killing at least seven people, officials said.

There was no immediate claim of responsibility for the latest deadly attack in the Afghan capital that comes days after a double bombing at a wrestling club killed at least 26 people.

At least seven people were killed and 24 wounded in the explosion, the interior ministry said in a statement. All the casualties were civilians.

The force of the blast shattered windows and shook nearby buildings. Among the dead was the driver of a car taking part in the commemorations. He veered off the road and into the front of a shop when the blast happened, witnesses told AFP. Two of his passengers were wounded, they said.

Afghan security forces said earlier they had shot dead a man who had been planning to blow himself up near supporters of Ahmad Shah Massoud. The Tajik commander led resistance to the Soviet occupation in the 1980s and to the 1996-2001 Taliban regime.

The attack came as convoys of gun-wielding men terrorized Kabul as they commemorated the 17th anniversary of Massoud’s death.

Massoud was killed two days before the 9/11 attacks in New York and Washington that precipitated the U.S.-led invasion of Afghanistan.

Police arrested 110 people and seized 20 cars and 10 weapons, the interior ministry said, as part of a crackdown on the violent commemorations.

Elsewhere, nearly 20 members of the Afghan security forces were killed in fighting overnight, adding to the hundreds of people killed in recent weeks.

Ten police officers were killed and eight wounded during an hours-long gunbattle with Taliban fighters in Wardak province, near Kabul, provincial governor spokesman Abdul Rahman Mangal told AFP. “Airstrikes were called in and over 50 Taliban fighters were killed” in the fighting in Daimirdad district, Mangal added.

On the other side of the country, Taliban fighters attacked a checkpoint in Obe district in Herat province, killing nine members of the security forces, provincial governor spokesman Jailani Farhad told AFP.

Five others were wounded in the attack that ended when government-backed reinforcements were sent to the scene, Farhad said, adding that 15 insurgents were killed.

The bloodshed comes amid a flurry of diplomatic efforts to convince the Taliban, Afghanistan’s largest militant group, to agree to negotiate an end to the war.

The smaller but potent Islamic State group is not part of the process, with the United States vowing to annihilate its fighters in Afghanistan. But Sunday’s blatant lawlessness in the capital and the limited response from security forces further undermined confidence in authorities.

In a firestorm of angry posts on social media, war-weary Afghans expressed their frustration with the constant violence and the government’s inability to protect civilians. “Why do people have to endure this every year on Sept 9th? Why is the #Afghan govt allowing this?” one social media user posted on Twitter. “Where is rule of law?” tweeted another.

A double bombing at a wrestling club in a heavily Shia neighborhood on Wednesday killed at least 26 people, including two journalists, and wounded 91. I.S. claimed responsibility for the attack.

The extremist group considers Shia Muslims apostates and has ramped up attacks against the minority community in recent years. The last major I.S.-claimed attack on Shias in Kabul was on Aug. 15 when a suicide bomber blew himself up in an education center, killing dozens of students.