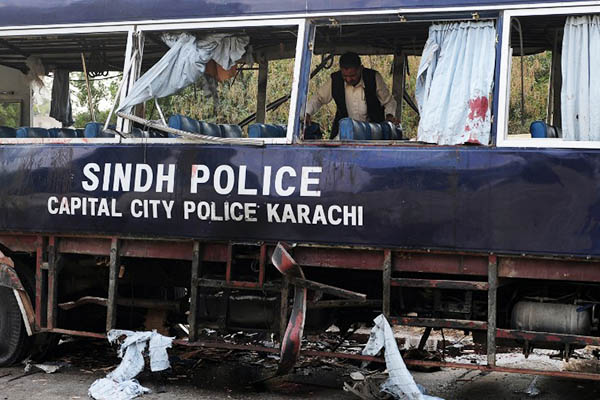 The Pakistani Taliban attacked a police bus on Thursday in Karachi, killing at least 12 policemen and wounding 60 others, officials said.

The attack came as Pakistan has been locked into negotiations with the Taliban aimed at ending a seven-year insurgency, with the level of violence in the country showing no signs of abating since talks began at the end of last month.

Munir Sheikh, a senior police official, told reporters the attack took place in the early morning. “Apparently it was a suicide car attack as an explosive-laden car hit the police bus transporting officials. So far 12 policemen have died.”

Another official, Farooq Awan who heads a special investigative unit, said the bus was making a U-turn after leaving a training center when a small van struck it.

Dr. Semi Jamali at Karachi’s Jinnah hospital confirmed that they had received 12 bodies. At least 58 wounded, both officers and civilians, were hospitalized, 10 of them in critical condition, she said.

Police said that more than 50 officers were on board the vehicle at the time of attack, which occurred in the Shah Latif Town jurisdiction of Karachi, close to the national highway.

Both Prime Minister Nawaz Sharif and President Mamnoon Hussain, in separate statements, condemned the attack and expressed sympathies with the families of the deceased.

The Pakistani Taliban claimed responsibility for the attack, which was the 11th since Sharif announced talks on Jan. 29 saying he wants to “give peace another chance.”

“We staged this attack in retaliation for our innocent brothers, who were killed in various incidents in Karachi, Peshawar, and Swabi over the past few days,” said an email signed by Tehreek-e-Taliban Pakistan (TTP) spokesman Shahidullah Shahid. Alleging that the militants killed had been victims of staged encounters, the TTP spokesman said over 20 extremists had been killed in similar circumstances in the past month.

Warning of further attacks, the statement added: “Until the government declares an official ceasefire, the TTP will respond to any attacks on its members with full force.” The government must declare a ceasefire immediately to stop such attacks on both sides, it added.