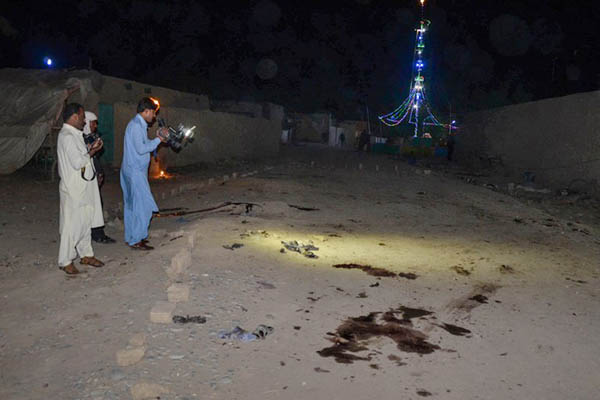 At least 18 people killed, 27 others injured in strike claimed by Islamic State

A suicide bomber blew himself up outside a Sufi shrine in Balochistan on Thursday killing 18 people, officials said, in an attack claimed by the Islamic State group.

The attack follows a deadly bomb blast at the same shrine in 2005, which killed 35 people.

“A suicide bomber blew himself up after he was intercepted by police guards on duty outside the shrine, killing 18 people including three children under the age of 12 and two policemen, and wounding at least 27 others, 14 of them seriously,” said provincial home secretary Akbar Harifal.

The blast occurred as Muslims attended annual celebrations of a local saint. Members of Sunni and Shia sects make daily visits to the shrine in Jhal Magsi district but attendance climbs significantly during festivities.

The explosion triggered panic, with worshippers shouting and running in different directions, officials at the site told AFP. Limbs of the dead and injured lay in pools of blood. “The suicide bomber struck outside the shrine at a time when it was packed with people attending anniversary celebrations of Syed Cheesal Shah,” said senior local administration official Asad Kakar, referring to the local saint.

Harifal said the seriously injured patients were being airlifted to Sindh province in the absence of adequate medical facilities in Balochistan.

The Islamic State Khorasan Province—the Middle Eastern group’s affiliate in Afghanistan and Pakistan—has since released a statement claiming the attack, according to the U.S.-based monitoring group SITE.

Officials said earlier on Thursday the incident came amid a new terror threat from four foreign agencies hostile to Pakistan. “I can tell you that four hostile agencies are planning a major terror attack in Pakistan to undo our gains in the fight against terrorism,” military spokesman Major General Asif Ghafoor told a press briefing on Thursday.

Pakistan has launched a series of military offensives since 2007 in its tribal badlands near the Afghan border to cleanse these areas of homegrown as well as Taliban and Al Qaeda-linked militants. Ghafoor did not disclose the names of the foreign agencies or their origin but added that “no organized infrastructure of any terrorist outfit exists anywhere in Pakistan now.”

Balochistan is afflicted by Islamist militancy, sectarian violence and a separatist insurgency. Sectarian violence—in particular by Sunni hardliners against Shia Muslims who make up roughly 20 percent of Pakistan’s 200 million people—has claimed thousands of lives in the country over the past decade.

Balochistan is the largest of Pakistan’s four provinces, but its roughly seven million inhabitants have long complained they do not receive a fair share of its gas and mineral wealth.

A greater push toward peace and development by authorities has reduced violence in recent years, but the remnants of militant groups are still able to carry out periodic attacks, particularly in the northwest.