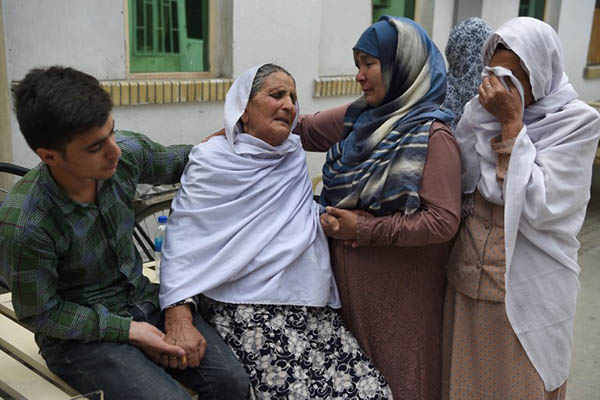 Claimed by Islamic State militant group, the attack left at least 13 dead and 31 others wounded

A suicide attacker blew himself up on Monday as government workers queued for an early bus home during the holy month of Ramzan, killing at least 13 people and wounding 31, officials and hospital staff said.

The Islamic State group claimed responsibility for the latest attack in the Afghan capital, a day before the government’s separate ceasefire with the Taliban is due to start.

The blast happened at the main gate of the Ministry of Rural Rehabilitation and Development, police and health ministry spokesmen told AFP. Employees were gathered at the entrance of the compound waiting for a bus to take them home when the bomber blew himself up in the crowd, said rural ministry spokesman Faridoon Azhand, who was inside the building at the time.

“I was in my office when I heard a big blast,” another employee told AFP. “Most of my colleagues were leaving for the day to go home. I am worried about my colleagues. We are told to stay inside for now.”

Police spokesman Hashmat Stanikzai confirmed the attacker had targeted the employees as they waited for the bus at around 1:00 p.m. They were leaving early due to the holy month of Ramzan, when most Muslims fast from sunrise to sunset.

The attack, which I.S. claimed via their Amaq propaganda agency, killed 13 people and wounded 31, Azhand told AFP. A doctor at a hospital treating many of the victims confirmed the death toll. Police and health officials said earlier that 12 people were killed and 31 wounded.

The attack was just one of several around Afghanistan on Monday. Militants raided a government building in the eastern city of Jalalabad in Nangarhar province, prompting terrified employees to jump out of the windows, officials said. A suicide bomber blew himself up at the entrance to the education department, triggering a fierce battle between gunmen and Afghan security forces, Nangarhar provincial governor spokesman Attaullah Khogyani told AFP. At least 10 people were wounded, city health department director Najibullah Kamawal told AFP.

In another incident an explosion inside a house in Kabul killed one person and wounded three others, Stanikzai said. The three wounded were detained after police found explosives, including suicide vests, in the building, which they suspect was being used by militants planning attacks in the city.

Taliban and I.S. militants have stepped up their attacks on Kabul in particular in recent years, making it the deadliest place in the country for civilians.

Afghan President Ashraf Ghani on Thursday announced police and troops would halt hostilities with the Taliban for a week—though he warned that operations against other groups, including I.S., would continue. The ceasefire would last from the “27th of Ramzan until the fifth day of Eid-ul-Fitr,” he said, indicating it could run from June 12-19.

The Taliban said on Saturday their fighters would stop attacking Afghan security forces but only for the first three days of Eid, the holiday capping Ramzan. They said they would continue attacking U.S.-led NATO troops.

It is the first time the militants have agreed to suspend fighting since the 2001 U.S. invasion, and the move was largely welcomed by war-weary Afghans.

Both sides have vowed to retaliate if attacked during the ceasefire.

If it holds, analysts had expressed cautious optimism that the agreements could help build trust between the government and the Taliban and lay the groundwork for peace talks. But with myriad armed groups in Afghanistan, there are still fears that I.S. could continue to carry out attacks—or even be helped by the Haqqani Network, a brutal arm of the Taliban that is suspected of partnering with I.S. on attacks in Kabul in the past.

The latest violence comes as dozens of protesters march hundreds of kilometers towards Kabul to demand an end to the nearly 17-year conflict.