Suicide Attacks on Churches in Lahore 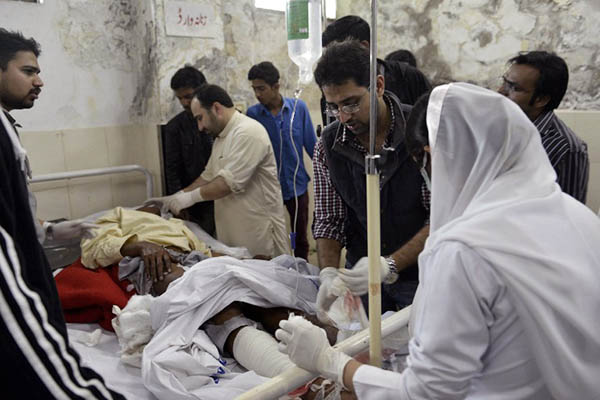 At least 14 dead in attack claimed by Jamaat-ul-Ahrar faction of Pakistani Taliban.

Fourteen people were killed and more than 70 injured when two Taliban suicide bombers attacked churches in Lahore on Sunday, sparking mob violence in which two other suspected militants died.

The bombings occurred during prayers at two churches located around half a kilometer apart in the Youhanabad district of Lahore, a neighborhood that is home to more than 100,000 Christians, officials said.

Dr. Mohammad Saeed Sohbin, medical superintendent of the nearby General Hospital, said: “We have received 14 dead and 70 injured,” adding that the figure did not include the suspected militants.

Zahid Pervez, the top health official in Lahore, confirmed the death toll and told reporters that 78 people were wounded in both attacks.

Earlier, police spokeswoman Nabila Ghazanfar said two policemen on guard duty had been killed in the attacks, while two people were beaten to death by protesters that took to the streets after the blasts.

“Policemen on duty at both the entrances tried to stop them but the bombers blew themselves up,” she said. “The angry mob protesting after the blast beat to death two people whom they suspected of being associates of the attackers.”

An AFP photographer saw the bodies of the two suspected militants on fire after the beating. It was not clear whether they were still alive at the time.

Christians make up around two percent of Pakistan’s mainly Muslim population of 180 million. They have been targeted in attacks and riots in recent years, often over allegations of profanity regarding the Quran or Islam’s Prophet. Sunday’s attacks was the worst on the community since a devastating double suicide-bombing in Peshawar in September 2013 killed 82 people, sparking a fresh wave of anger at the government for failing to protect Christians.

That came months after more than 3,000 Muslim protesters torched some 100 houses as they rampaged through Joseph Colony, another Christian neighborhood of Lahore, following allegations of blasphemy against a Christian man.

Hundreds of Christian protesters clashed with police on Sunday, attacking their cars with stones and sticks, as women wept and beat their heads and chests. The protesters later turned on the city’s bus rapid transit system, a signature project of the ruling PMLN party of Prime Minister Nawaz Sharif.

Sharif issued a statement condemning the bombings and “directed provincial governments to ensure the security of [the] public and their properties.”

Christians also took to the streets in other cities, including Karachi, where around 200 protesters blocked a main road and burnt tyres. Sunday’s attack was the first carried out by the Taliban since three of their major factions said on Thursday they had reunited.