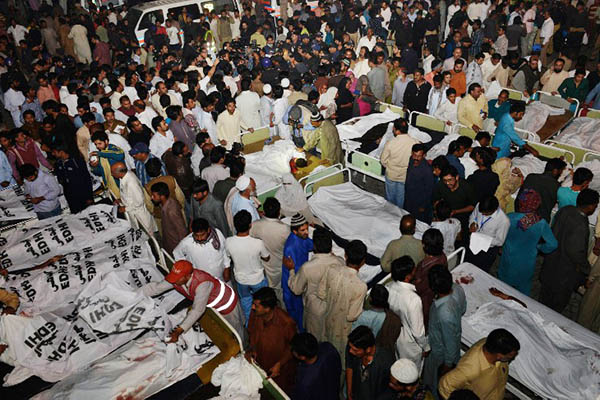 At least 60 people injured in explosion near border crossing between Pakistan and India.

A suicide bomber killed at least 55 people on Sunday at the Wagah border crossing in Lahore, the blast tearing through crowds of spectators leaving the site after the colorful daily ceremony to close the frontier.

“It appears to have been a suicide attack. At least 48 people have been killed, women and children were also killed,” said Mushtaq Sukhera, the Punjab provincial police chief. At least 60 were wounded in the blast. Later, a police spokesman said that the death toll had reached 55 and more casualties were feared.

Lahore police chief Amin Wains confirmed it was a suicide attack. “People were returning after watching the parade at Wagah border when the blast took place. Ball bearings were found at the scene,” he said.

The attack is a rare strike in Punjab, Pakistan’s richest and most populous province and powerbase of Prime Minister Nawaz Sharif, which has been spared the worst of the bloody wave of Islamist violence that has assailed the country in recent years.

Huge crowds gather on both sides at Wagah each sunset to see the display of military pageantry that accompanies the formal closing of the border post. It appears the blast took place some distance from the border itself.

Tahir Javed, Punjab provincial commander of the Rangers paramilitary force that guards the post, said three of his men had been killed. “The suicide bomber failed to cross the security barrier and blew himself up outside when people were coming out,” he said.

There are several security checkpoints on the road leading to the border post, which is equipped with a ceremonial gate and banked seating, and spectators are frisked before entering, though such searches are not always particularly rigorous.

There was no immediate claim of responsibility but Pakistan has been wracked by a homegrown Taliban insurgency that has killed thousands of people in recent years. But attacks, once a near-daily occurrence, have tailed off since the Army launched a major anti-militant offensive in the northwest.

In June the Army began a long-awaited operation against militant hideouts in the North Waziristan tribal area, after a bloody raid on Karachi Airport ended faltering peace talks between the government and the Taliban.

More than 1,100 militants and 100 soldiers have been killed since the start of the operation and more than 100 militants have surrendered, according to the military.