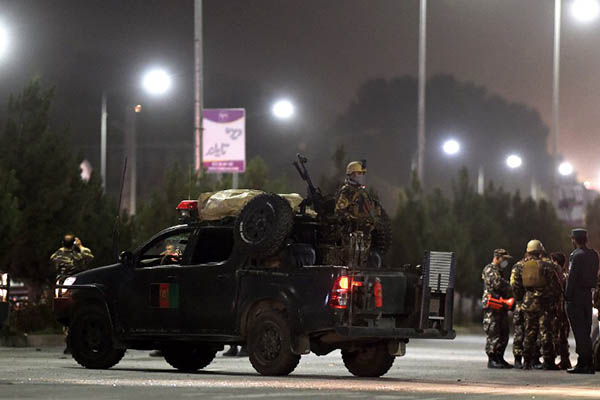 At least 20 Afghan cadets killed in attack claimed by the Taliban.

A suicide attacker blew himself up near the Kabul police academy on Friday, officials said, killing at least 20 Afghan cadets in the second major attack in the Afghan capital in less than 24 hours.

The incident, which comes as cadets were returning to the academy after their two-day weekend, marks a serious breach of security at a premier training institute for Afghan security forces.

“A suicide bomber on foot blew himself up near the academy,” said Deputy Interior Ministry Spokesman Najib Danish. “Heavy casualties are expected.”

“The attacker was wearing police uniform… when he detonated his explosives, 20 cadets were killed and 20 more were wounded,” a senior Afghan intelligence official told AFP, requesting anonymity. The bomber managed to place himself in a queue as police trainees were waiting to be searched before entering the academy, the official said.

Another police official confirmed that toll while a third senior security source told AFP that 25 cadets were killed in the attack.

The academy in west Kabul is a premier training institution for police forces in Afghanistan, with between 2,000 and 3,000 cadets graduating every year. The suicide bombing comes less than 24 hours after a truck bomb tore through central Kabul, killing 15 civilians and wounding 240 others in the first major attack in the Afghan capital since the announcement of Taliban leader Mullah Omar’s death.

The Taliban were behind the suicide attack, the spokesman for the group, Zabihullah Mujahid, told AFP.

The carnage comes a day after Taliban insurgents killed nine people in multiple attacks on police targets, including a truck bombing in the volatile eastern province of Logar.

The uptick in attacks highlight growing insecurity in the country amid a faltering peace process with the Taliban as Afghan forces face their first summer fighting season without full NATO support. A U.N. report published Wednesday said civilian casualties in Afghanistan hit a record high in the first half of 2015.

The report said 1,592 civilians were killed, a six percent fall from last year, but the number of injured jumped four percent to 3,329. Overall, casualties reached their highest level since the U.N. began issuing its authoritative reports in 2009.

The statistics are a grim indicator of the expanding insurgency, with Afghan forces increasingly battling the militants on their own after NATO’s combat mission ended in December.