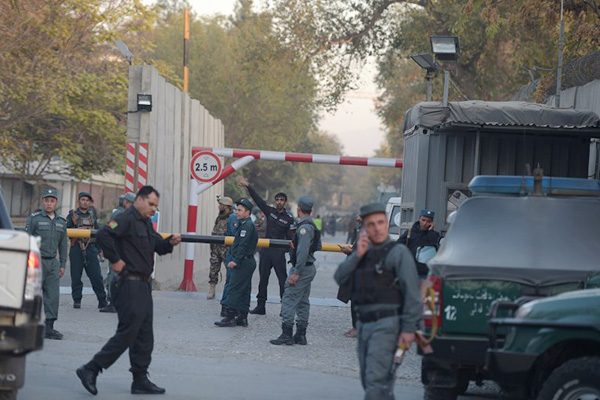 A suicide bomber believed to be as young as 12 struck Kabul’s heavily fortified diplomatic quarter on Tuesday and killed at least five people, showing that militants can still hit the heart of the city despite tighter security.

It was the first attack targeting the Afghan capital’s “Green Zone” since a massive truck bomb ripped through the area on May 31, killing or wounding hundreds, and prompting authorities to strengthen protection.

The Islamic State group claimed responsibility for Tuesday’s attack, which follows a spate of suicide assaults by Taliban and I.S. insurgents on security installations and mosques in recent weeks. A Western security source told AFP the attacker appeared to have been targeting workers leaving an Afghan defense ministry facility inside the heavily protected zone.

Health ministry spokesman Ismail Kawoosi told AFP that at least five people had been killed and 20 wounded, including women. “The suicide attack was carried out by an underage bomber, a boy we think 13 or 15 years old, killing at least four and wounding over a dozen more civilians,” said interior ministry spokesman Najib Danish.

A police spokesman said the attacker may have been as young as 12.

Defense ministry spokesman Dawlat Waziri said the bomber “made it through the first checkpoint but was stopped at the second checkpoint and detonated.”

“We don’t know the target but it happened a few meters from the defense ministry’s foreign relations office. There were no casualties to our personnel,” Waziri said.

The attack is a setback for Afghan President Ashraf Ghani who had promised to beef up the security of the diplomatic zone after a truck bomb detonated outside the German embassy five months ago. Ghani immediately ordered an investigation into how Tuesday’s attacker had been able to enter the supposedly secure area.

A Western security source told AFP he had repeatedly warned Afghan authorities about lax security at the checkpoint targeted by the bomber.

The attack struck the heart of the city’s diplomatic area, where many embassies and the offices of major international organizations including the United Nations and NATO’s Resolute Support mission are located.

“I was 100 meters away when the explosion happened and as I ran towards the site I saw several people lying in blood—one had been hit in the head and was moving. It was a horrible scene,” an eyewitness told TOLOnews. Another witness told AFP: “A lot of people were dead and injured and there was no one to carry them away.”

AFP reporters heard a loud explosion around 4:00 p.m. just as workers would have been leaving their offices to go home, followed by the sirens of emergency services. Many injured people were carried from the scene of the blast, put into ambulances and police pickup trucks and driven away.

U.S. special charge d’affaires Hugo Llorens, America’s top diplomat in Afghanistan in the absence of an ambassador, condemned the “cowardly attack” in a tweet.

The last major assault in Kabul was on Oct. 21 when a suicide attacker hit a busload of Afghan army trainees, killing 15. On Oct. 20 a suicide bomber pretending to be a worshipper blew himself up inside a Shia mosque in the city during evening prayers, killing 56 and wounding 55.

“The Taliban and I.S. are trying to demonstrate a lot of potency before the winter,” said Vanda Felbab-Brown, a senior fellow at the Brookings Institution.

Security in Kabul has been ramped up since the May truck bomb that went off on the edge of the Green Zone, killing around 150 people and wounding 400 others. Special truck scanners, barriers and permanent and mobile checkpoints have been rolled out across the city.