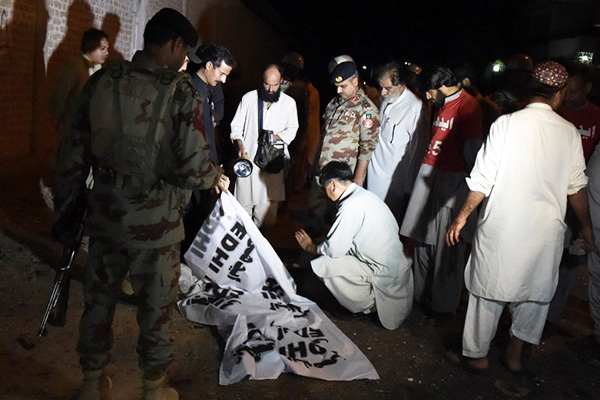 The attack came on the eve of Eid ul-Fitr and was targeting Shia Muslims.

A suicide bomber apparently targeting minority Shia Muslims blew himself up late Friday, killing a security guard who intercepted him at the entrance to a housing complex in Balochistan province, police said.

The attack, which struck on the eve of Eid ul-Fitr, took place at Railway Colony in Quetta, near a neighbourhood that is home to Shia Hazaras who have been targeted in the past by Sunni militants.

“The security guard of Railway Colony was killed after he intercepted a suicide bomber who blew himself up,” said senior police official Waheed Khattak. “Police suspect that the bomber was headed to Hazara Town, but due to strict security and several checkpoints, he tried to enter from Railway Colony,” he said.

The chief of the local police station Naseer Ahmed confirmed the incident, hailing the security guard for sacrificing his life in order to save others.

The bombing came ahead of Eid ul-Fitr, which began in Pakistan on Saturday to mark the end of Ramzan.

Sectarian violence, in particular by Sunni hardliners against the Shias that make up roughly 20 percent of Pakistan’s 200 million people, has claimed thousands of lives in the country over the past decade. The worst atrocities, however, have been in Balochistan province, home to some 200,000 Shias. The deadliest attack so far, in January 2013, saw a suicide bomber blow himself up in a small snooker hall. About 10 minutes later, when rescue workers had rushed to the scene, a truck packed with explosives that had been parked near the hall was detonated. The overall toll was close to 100 dead.