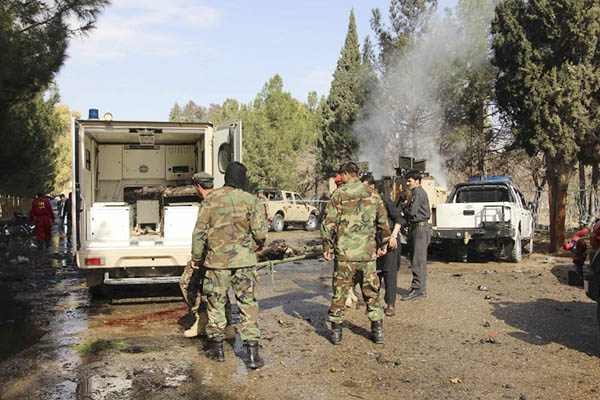 At least six people were killed on Saturday when an explosives-laden car rammed into Afghan soldiers who had queued outside a bank in southern Helmand province to collect their salaries, officials said.

Nearly two-dozen others were wounded in the explosion in the capital Lashkar Gah, many of them critically. No group has so far claimed responsibility, but the resurgent Taliban control vast swathes of the opium-ravaged province and have repeatedly threatened to seize Lashkar Gah.

Omar Zhwak, the provincial governor’s spokesman confirmed the casualties, saying the wounded had been rushed to hospitals in the city. The Italian-run Emergency hospital in Lashkar Gah said it had received at least 12 people, including a woman and a child. Three military vehicles were destroyed in the bombing, Feda Mohammad, a local witness, told AFP.

For years Helmand was the centerpiece of the U.S. and British military intervention in Afghanistan only for it to slip deeper into a quagmire of instability, with large swathes of the province under the control of the insurgents. Lashkar Gah—one of the last government-held enclaves—also risks falling to the Taliban’s repeated ferocious assaults. The intensified fighting in the province recently forced thousands of people to flee to Lashkar Gah from neighboring districts.