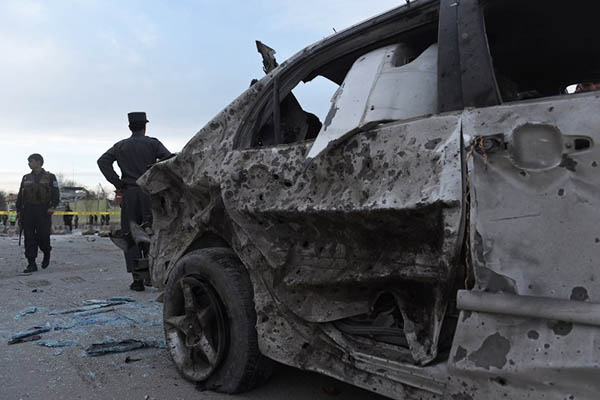 A suicide bomber on foot struck a government vehicle in Kabul on Wednesday, killing at least six people and wounding 10 others, officials said, in an attack claimed by the Islamic State group.

He put the death toll at six, including five civilians and one military official, with 10 wounded in the blast, which occurred close to the defense ministry.

Earlier, the interior ministry had put the death toll at four, including two security officials. Another security official told AFP the targeted vehicle belonged to the government’s VIP protection unit.

The SITE monitoring group said the Islamic State’s local Khorasan province affiliate had claimed the attack in a communiqué claiming it had targeted Afghan intelligence officials.

Fighters from I.S., which controls territory across Syria and Iraq, have been making steady inroads in Afghanistan, winning over sympathizers, recruiting followers and challenging the Taliban on their own turf, primarily in the country’s east. The assault underscores rising insecurity in the war-torn country nearly two years after U.S.-led NATO forces formally ended their combat operations.

It comes after four Americans were killed on Saturday in a suicide bombing inside Bagram Airfield—the largest U.S. military base in Afghanistan—in a major breach of security.

The Taliban claimed responsibility for the bombing, which left 16 other U.S. service members and a Polish soldier wounded.

In July, I.S. jihadists claimed responsibility for twin explosions that ripped through crowds of Shia Hazaras in Kabul, killing at least 85 people and wounding more than 400 others. The bombings marked the deadliest single attack in the Afghan capital since the Taliban were ousted from power in a 2001 U.S.-led invasion.