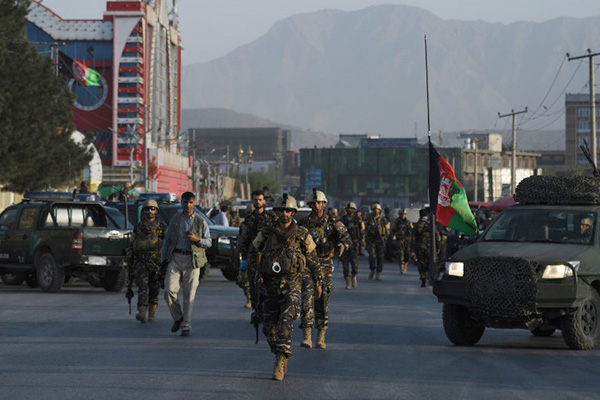 A suicide bomber blew himself up near a cricket stadium in the Afghan capital Kabul on Wednesday, killing three people including a policeman and wounding five others, police said.

The attacker detonated the bomb after he was stopped at a security checkpoint by suspicious police as he walked towards Kabul’s main cricket ground where a match was under way. The SITE monitoring group said the Islamic State’s local Khorasan province affiliate had claimed the attack—the latest in a series of deadly assaults in the city.

“The security forces by sacrificing themselves have prevented the attacker from reaching the crowd [inside the stadium] and creating a catastrophe,” police spokesman Basir Mujahid told AFP.

Two of the wounded were police officers.

Several ambulances were seen speeding away from the scene, apparently taking the injured to hospital, an AFP reporter said. Scores of police blocked the road leading to the stadium where the sixth match of the Shpageeza Cricket League, a domestic T20 tournament, between the Boost Defenders and Mis Ainak Knights was under way.

A handful of foreign players are also taking part in the competition, which started on Monday.

South African batsman Cameron Delport, who is playing for the Defenders, expressed his sorrow for the victims of the explosion on Twitter. “Sad to hear about the Bomb Blast during our game outside the stadium. Thank god we are all safe, Condolences to the people that passed away,” he wrote.

Hundreds of spectators could be heard from outside the stadium as firefighters washed down the road where the bomber had blown himself to bits.

Afghanistan Cricket Board spokesman Farid Hotak told AFP the match was briefly interrupted and “all players and cricket board officials are safe.”

Cricket was banned in Afghanistan during the Taliban’s 1996-2001 rule but the sport has seen a stunning revival in recent years. The last major attack in Kabul happened on Aug. 29 when a suicide bomber blew himself up outside a bank days before the Eid festival, killing five people and wounding several others.

Wednesday’s assault came hours after eight Afghans expelled from Germany arrived in Kabul as Berlin resumed deportations of Afghan asylum seekers. It had suspended the process when a huge truck bomb tore through the city’s highly fortified diplomatic quarter on May 31, killing around 150 people and wounding hundreds more.

The latest group represented the sixth wave of repatriations of Afghans from Germany since December under a disputed Afghan-European Union deal aimed at curbing the influx of migrants. Berlin has argued that it can safely repatriate people to Kabul and other parts of Afghanistan, even as Taliban and Islamic State militants terrorize much of the country.

“They told me that there is no problem in your country and you can live there so you can’t stay here [Germany] anymore,” Mohammad Jamshidi, one of the deportees, told AFP.