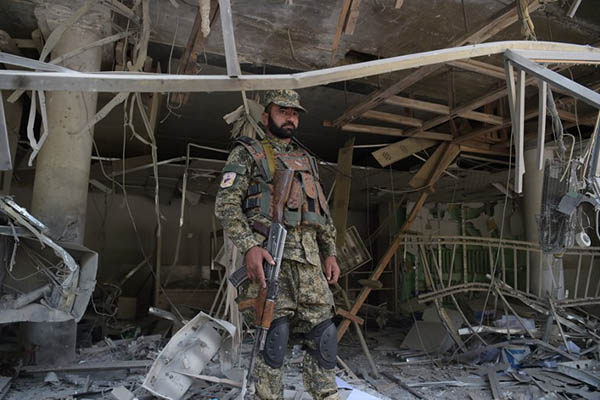 A suicide bomber blew himself up on a busy shopping street near the heavily-fortified U.S. embassy in central Kabul on Tuesday, killing four people and injuring several others, officials said.

It was the latest in a series of deadly attacks to hit the Afghan capital, and comes around three months after a massive truck bomb ripped through the same area, killing about 150 people.

“At around 10:00 a.m. a suicide bomber set off his explosives near a private bank and close to Massoud Square. More details later,” said Najib Danish, a spokesman for Afghanistan’s interior ministry. He added in a message on Twitter that four people had died in the attack.

The blast happened at a time when many officials were expected to be collecting their salaries ahead of this week’s Eid holiday.

Waheed Majroh, a health ministry spokesman, told AFP one dead body and eight wounded people had been brought to Kabul hospitals so far. The blast occurred on a street lined with shops and banks leading to Massoud Square, near the United States embassy and Kabul’s diplomatic area.

There was no immediate claim of responsibility but Taliban insurgents are currently at the peak of their summer fighting season, and have launched several deadly assaults around the country in recent weeks.

Since NATO forces ended their more than a decade-long combat mission in Afghanistan at the end of 2014, Afghan troops and police have struggled to beat back the resurgent Taliban, while facing the growing menace of the Islamic State group. It was the latest explosion to rock the war-weary Afghan capital and comes a week after United States President Donald Trump committed American soldiers to Afghanistan indefinitely.

On May 3, a powerful blast targeting a foreign forces convoy near the U.S. embassy and NATO headquarters killed at least eight people and wounded 28 during morning rush hour. Later in the month a massive truck bomb tore through Kabul’s diplomatic quarter, home to the presidential palace and a host of foreign embassies, killing about 150 and wounding around 400 people, mostly civilians.

On June 3, seven people were killed after suicide bombers attacked the funeral of a protester who was killed the day before during a demonstration against insecurity in Kabul. After Trump paved the way for more U.S. forces to be sent to Afghanistan the Taliban, which ruled the war-torn country from 1996-2001, vowed to turn it into a “graveyard” for foreign forces.