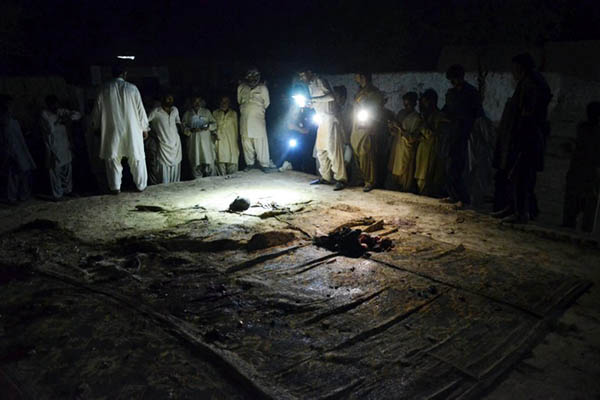 At least 11 people killed and around a dozen others injured.

A suicide bomber blew himself up in a mosque killing at least 11 Shia Muslims, including six children, and wounded at least a dozen others in a remote town in Balochistan province on Thursday, officials said.

The attack took place as Shias gathered at the mosque to observe the holy month of Muharram in the town of Chalgari. “At least 10 people were killed and 12 others were wounded after a suicide bomber blew himself up at a Shia mosque,” said provincial home minister Sarfraz Bugti.

Bugti said there were six children between 10 and 12 years old among the dead and that some women had also been killed. Waseem said the suspected suicide bomber appeared to be about 18 years old and was wearing a woman’s burqa.

Witness Bashir Khan told AFP the bomber was trying to get inside the mosque hall but was intercepted by security after which he blew himself up in the courtyard of the mosque where children were playing. “There is blood spattered all over, pieces of human flesh and shoes are littered everywhere,” Khan said. “The people put the wounded in private cars and took them to other towns as there is no hospital here,” he added.

Sectarian violence—in particular that carried out by Sunni militants against Shias, who make up roughly 20 percent of Pakistan’s population of 200 million—has claimed thousands of lives in the country over the past decade. Many of the worst atrocities have taken place in Balochistan, home to some 200,000 Shias.

Pakistan has deployed some 10,000 troops and 6,000 paramilitary members to prevent sectarian violence during Muharram, which began last Thursday and is frequently marred by sectarian violence. Clashes between Sunnis and Shias led to at least 11 deaths two years ago in Rawalpindi.