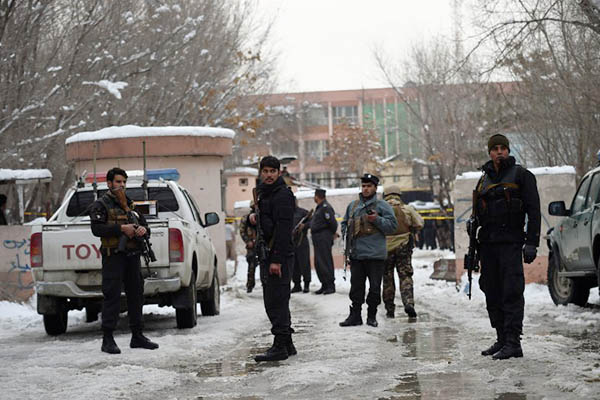 At least 20 people killed, 41 others injured in latest attack on government institutions in Afghanistan.

A suicide bomber ripped through a crowd of Afghan Supreme Court employees on Tuesday, killing at least 20 people and wounding 41 others in the second attack on government institutions in under a month.

The assailant detonated the device in the parking lot as employees were boarding a bus to go home, leaving bodies and dismembered limbs scattered around the area, with women and children among the casualties. No group has so far claimed responsibility for the blast in the snow-laden Afghan capital, but it occurred as the Taliban are ramping up their nationwide insurgency even in the peak winter months when fighting usually abates.

“My father and I were exiting through the parking lot when a huge blast hit us,” said a witness, breaking down in tears. “My father is dead now. How will I live without him?”

The piercingly loud explosion shook nearby buildings, smashing windows and blasting debris onto the streets. Police blocked off the road around the high-profile compound located near the U.S. embassy as panicked relatives of court employees began to gather and ambulances and fire trucks rushed to the scene.

“Twenty people were killed [including 3 women & one child], and 41 others were injured in today’s suicide attack in #Kabul,” health ministry official Wahidullah Mayar wrote on Twitter.

The ministry warned the toll could rise still further.

There were scenes of desperation at the Italian-run Emergency hospital in Kabul as anxious civilians looking for missing relatives searched through the ambulances that brought the dead and wounded.

President Ashraf Ghani condemned the attack in a statement, calling it a “crime against humanity and an unforgivable act.”

The Taliban have previously targeted the Supreme Court. They killed 15 civilians with a suicide car bomb at the entrance to the compound in 2013. At the time the insurgent group threatened further attacks on the judiciary if it continued to sentence its militants to death.

The U.S. embassy in Kabul also denounced Tuesday’s bombing, saying it was an “attack on the very foundation of Afghan democracy and rule of law.” The carnage underscores growing insecurity in Afghanistan where local forces are struggling to combat a resilient Taliban insurgency as well as Al Qaeda and Islamic State militants more than two years after NATO’s combat mission ended.

Last month twin suicide blasts claimed by Taliban fighters tore through employees exiting a parliament annex in Kabul, killing 30 people and wounding 80. On Monday the United Nations said civilian casualties in Afghanistan in 2016 were the highest recorded by the world body, with nearly 11,500 people—one third of them children—killed or wounded.

The report comes as officials warn of a growing humanitarian crisis in Afghanistan, as unprecedented numbers of people flee the fighting while hundreds of thousands of failed asylum seekers are repatriated home.

Earlier this month an official U.S. watchdog said the death rate among Afghan troops and police soared last year as the government’s overall control of the country declined significantly. The grim new statistics paint a picture of a beleaguered nation still in the grip of a security crisis, despite many years and billions of dollars spent building up Afghanistan’s army and police.