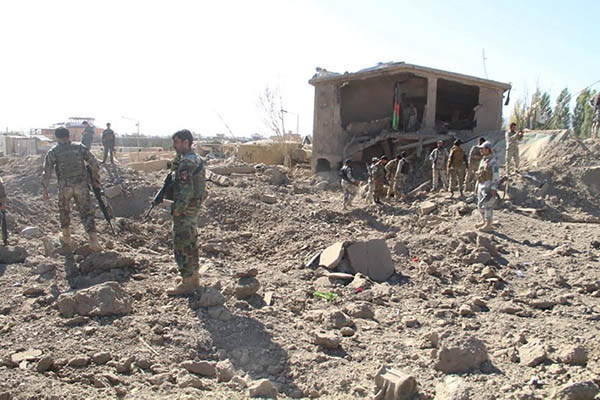 At least 71 people dead, around 170 others wounded in separate attacks

Two separate suicide and gun attacks on police and soldiers in Afghanistan left at least 71 dead and nearly 170 wounded on Tuesday in the latest devastating assaults on beleaguered security forces.

The Taliban claimed the more deadly of the two assaults, a coordinated attack on police in Paktia province’s Gardez city. That assault killed 41 people and injured 158, according to the interior ministry, and left hospital officials calling for blood donations. There were desperate scenes as relatives queued for news of loved ones after the hours-long battle.

A separate ambush blamed on the Taliban in the neighboring province of Ghazni killed 25 security officials and five civilians with 10 wounded, the interior ministry said.

Afghanistan’s army and police, on the front line against the Taliban since foreign combat forces pulled back in December 2014, have suffered shocking casualties over the past year. Their ranks are beset by corruption and desertion.

“The hospital is overwhelmed and we call on people to donate blood,” said Shir Mohammad Karimi, deputy health director in Gardez, who put the number of wounded there at more than 200. Doctors and nurses rushed to attend to the wounded women, children and police filling the corridors where some bodies also lay. Outside, university students formed a queue to donate blood, an AFP photographer said.

The attack, claimed by the Taliban in a tweet, began when two suicide bombers driving an explosives-laden truck and a Humvee blew them up near the training center, which is close to the Paktia police headquarters. The blasts flattened a building and enabled gunmen to force their way inside the compound, according to officials and the interior ministry.

“Most of the victims are civilians who had come to the police headquarters to get their passports and national IDs,” a statement from the Paktia governor’s office said.

A university student who was in class at the time said he heard “a big boom” which shook the building and shattered windows. “As we were trying to find our way [out of the building] I heard a second blast and then the dust and dirt covered us in the class. Several of my classmates were wounded by broken glass,” Noor Ahmad told AFP.

The battle between the attackers, armed with guns and suicide vests, and security forces lasted around five hours before it ended with all five militants killed, officials said. Photos posted on Twitter showed two large plumes of smoke rising above the city.

The second attack, in Ghazni some 100 kilometers west of Gardez, followed a similar pattern involving insurgents detonating an explosives-laden Humvee near a police headquarters then storming the building, Haref Noori, the Ghazni governor’s spokesman, told AFP.

Afghan President Ashraf Ghani condemned the attacks and praised the “bravery and sacrifice” of security forces.

The attacks are the latest in a series of assaults on security installations, including one on a military hospital in Kabul in March which may have killed up to 100 people, and a devastating attack on a base in Mazar-i-Sharif which left 144 people dead. They came one day after four-way talks between Afghanistan, Pakistan, the United States and China were held in Oman with the aim of ending the Taliban’s 16-year insurgency.

Tuesday’s attack in Gardez began hours after a U.S. drone strike in Pakistan’s Kurram tribal district, part of which borders Paktia, killed at least 26 Haqqani militants, officials have said. A senior commander in the Afghan Taliban told AFP on condition of anonymity the attack was in retaliation for the U.S. aerial assault, the deadliest targeting militants in the Pakistani tribal region this year.

In Kurram last week the Pakistani military rescued a U.S.-Canadian family who had been abducted by militants in Afghanistan in 2012. U.S. President Donald Trump has said they were being held by the Haqqani Network. The extremist group is known for its frequent use of suicide bombers. The Haqqanis have also been accused of assassinating top Afghan officials and holding kidnapped Westerners for ransom.