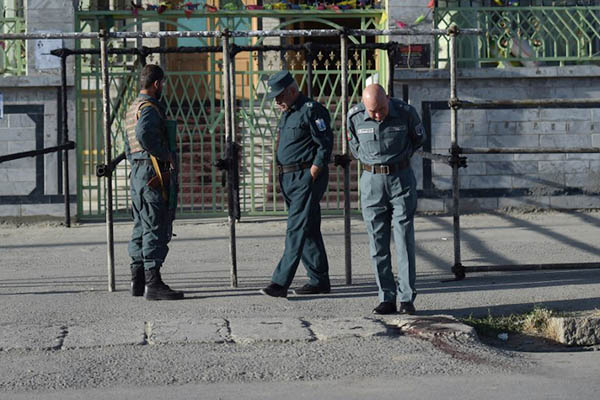 Suicide bombers struck a crowded Shia mosque in Kabul late Thursday, killing four people in the latest in a series of militant attacks to rattle the Afghan capital during the holy month of Ramzan.

The assault claimed by Islamic State jihadists left eight others wounded when the bombers blew themselves up in the kitchen of Al Zahra mosque after police prevented them from entering the prayer hall packed with worshippers. The carnage comes at a time Kabul is already on edge following a wave of deadly bombings, which triggered angry public protests calling for the resignation of President Ashraf Ghani’s government over spiraling insecurity.

“Terrorist attack on Al Zahra mosque in west of Kabul,” ministry spokesman Najib Danish said. “Three civilians and one policeman was killed and eight others were wounded.”

The attack occurred as the mosque was preparing for Lailatul Qadr, an all-night congregation of worshippers during Ramzan that holds special significance for Shia Muslims. I.S., which has frequently targeted minority Shia areas in Kabul, claimed responsibility for the attack via its propaganda agency Amaq.

The Taliban, Afghanistan’s biggest militant group locked in a fierce rivalry with I.S., disavowed the attack with a spokesman saying they do not target places of worship.

The rise of I.S. has raised the specter of sectarian discord in Afghanistan, something that the Sunni-majority country has largely been spared despite decades of war. Afghanistan has witnessed a wave of attacks on Shia Muslims in recent months claimed by I.S., which considers Shias apostates.

General John Nicholson, the top U.S. commander in Afghanistan, has pledged to defeat the local I.S. affiliate this year. In April the U.S. military dropped its largest non-nuclear bomb ever used on an I.S. stronghold in eastern Afghanistan, killing dozens of jihadists, but the group still appears to be resilient.

I.S. fighters this week captured Tora Bora, a mountain cave complex in eastern Afghanistan that was once the hideout of Osama bin Laden, despite pressure on the jihadists from U.S.-led forces.