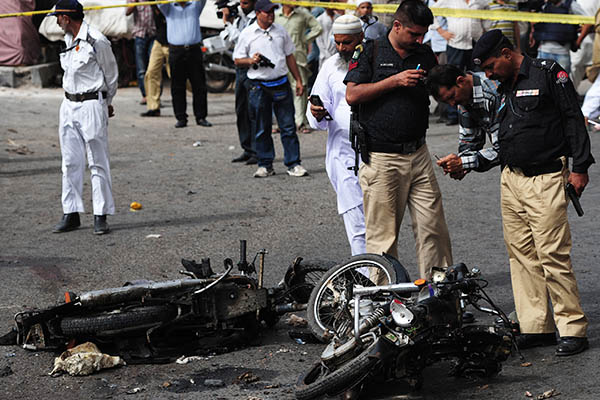 At least two killed, and three others injured in explosion caused by traffic accident.

At least two people were killed and three others injured after a suicide bomber detonated his explosives following an accident near a mosque in Karachi, according to a senior police officer.

“The explosives on a suicide bomber’s motorcycle detonated near the Braili Mosque at Paredi Street in Saddar,” said Abdul Khaliq. “Shockingly, the motorcycle had an official Sindh Police license plate,” he added.

“In collaboration with the Bomb Disposal Unit, we are investigating whether the suicide bomber’s target was the people offering prayers in the mosque or whether [his explosives detonated prematurely and] his target was some other location,” he added.

This was the first suicide attack in Pakistan since the holy month of Ramzan started this week. Security was already at high alert due to retaliatory threats from the Pakistani Taliban over the ongoing military offensive in North Waziristan.