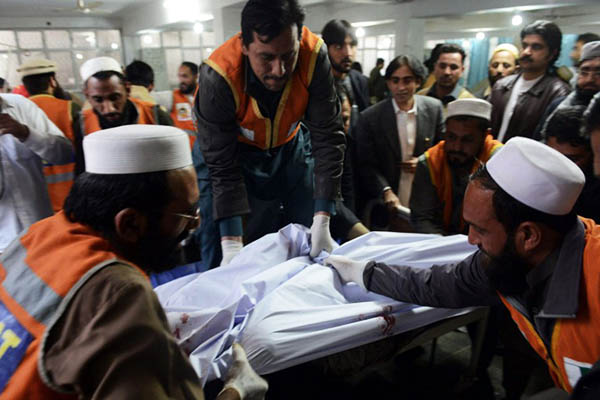 A suicide attack targeting a Frontier Corps convoy in Peshawar on Tuesday killed at least four people and injured 24 others.

“It was a vehicle-borne suicide attack which killed three people including an FC soldier,” senior police official Najib-ur-Rehman told AFP, adding the two others were civilians, one of them a woman. A senior security official later told AFP a fourth person had died. Local hospitals were treating 24 others for injuries, officials said. Peshawar police chief Ijaz Khan said the target was likely Brig. Khalid Javed, the second-most senior officer of the FC. “Brig. Khalid Javed is safe and sound,” he said. A spokesman for Peshawar’s Lady Reading Hospital, Jameel Shah, confirmed the death toll.

Khyber-Pakhtunkhwa Information Minister Mushtaq Ghani, who rushed to the site shortly after the blast, told media: “The incident happened when the FC convoy was traveling through the area. It could be in retaliation to Operation Zarb-e-Azb.”

Pakistan’s military launched Operation Zarb-e-Azb in North Waziristan on June 15 following a Pakistani Taliban-led attack on Karachi’s international airport. According to the Army, over 1,000 militants and 86 soldiers have been killed in the fighting so far. The Taliban, meanwhile, have claimed that the majority of the deceased are civilians.

The Pakistani Taliban faction led by Maulana Fazlullah claimed responsibility for the attack, vowing revenge against the ruling Pakistan Muslim League Nawaz (PMLN) for a military operation in the northwest. Speaking to AFP by telephone, the group’s spokesman Shahidullah Shahid said: “We claim responsibility for the Peshawar attack on Tuesday. We have no loss from operation Zarb-e-Azab,” referring to the military strikes.  “We are still as active as the past and will show the mirror to the PMLN as we showed the ANP [Awami National Party].”

The ANP ruled Khyber-Pakhtunkhwa province from 2008 until 2013 and was regularly targeted by the Taliban, who killed hundreds of its workers and some senior figures.

The military said it had killed 19 insurgents in the latest round of airstrikes targeting militant hideouts in the northwest. “In precise aerial attack at Dandi Kachkol near Ghulam Khan and Gurbaz and Mana near Paht Ziarat in North Waziristan, 19 militants have been killed,” the Army said in a statement.

Ghani told journalists police and intelligence officials were investigating how the militants had reached the railway station, which is located in the city’s cantonment area. “We have made efforts to make Peshawar safe,” he added.

Shafqat Malik, the chief of Peshawar’s bomb disposal squad, confirmed that attack had been a suicide blast. “The car contained 45kg of explosives,” he said, adding that artillery shells had been used to make the detonation more powerful. “Fortunately the area wasn’t too congested at the time otherwise the damage could have been far worse,” he added.