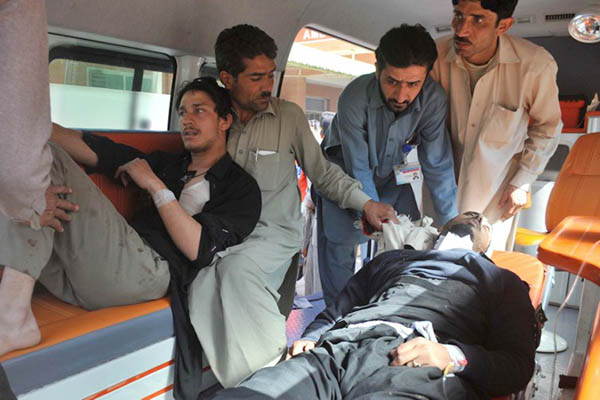 At least seven killed, 15 others injured in attack claimed by Jamaat-ul-Ahrar militant group.

At least seven people were killed and 15 others wounded when multiple Taliban suicide bombers attacked a court complex in Khyber-Patkhunkhwa province on Tuesday, the latest in a series of assaults, which have raised fears militants are regrouping.

One bomber was briefly on the loose inside the busy complex in the Tangi area of Charsadda district but was killed by police some 20 minutes after the attack began, officials said. A second bomber was shot dead by security forces and a third died when he detonated his vest outside the main gates of the facility, according to police.

The attack was claimed by the Jamaat-ul-Ahrar faction of the Pakistani Taliban, which carried out a series of apparently coordinated assaults last week including a powerful bomb blast in Lahore which killed 14 people. Earlier this month the group vowed a fresh offensive on targets in Pakistan including the judiciary.

“So far seven people have been killed and 15 wounded,” Suhail Khalid, district police chief, told AFP, adding that a lawyer was among the dead.

The three attackers had opened fire on police and thrown grenades as they tried to battle their way into the complex, Khalid said. “Bomb disposal experts told us that each bomber was wearing seven to eight kilograms of explosives,” he told reporters in Charsadda. “Police fought bravely and saved Charsadda from devastation.”

It was not immediately clear how many people were inside at the time of the attack, but hundreds of people including lawyers, judges and citizens normally attend such district court complexes every day. Lawyers and the judiciary are frequent targets in Pakistan. Among last week’s assaults was a bomb blast targeting a van carrying judges in Peshawar, which killed their driver.

An AFP reporter at the scene said the area was littered with human remains, while a pile of law books stained with blood and riddled with bullets lay strewn outside an office.

Police scoured the area for evidence as military helicopters whirred overhead. An old man whose four-year-old grandson died in the attack wept. Another man who witnessed the attack, Muhammad Hussain, said he was about to enter the complex when he heard the blast. “When I looked up I saw three armed men, hurling grenades and opening fire,” said the 35-year-old civil servant, adding he sought shelter in a nearby police barracks from where he heard the gunbattle. “This continued for some minutes and then I heard another big bang. Some minutes after a policemen told me that it’s all over.”

Last August, Ahrar along with the Islamic State group claimed a suicide bombing in Quetta that killed 73 people, including many of the city’s legal community.

Prime Minister Nawaz Sharif’s office condemned the latest assault and the loss of life. “We are a steadfast nation and will not be deterred by such attacks. Our government will continue to fight against terrorist elements and we will succeed,” a statement said.

Police and troops had been on high alert in Pakistan after last week’s wave of attacks, which killed more than 100 people. Most, including the Lahore bomb, were claimed by Ahrar, a faction of the Tehreek-e-Taliban Pakistan group. But the Islamic State group claimed the deadliest of last week’s assaults, a suicide bomb at a Sufi shrine in Sindh province on Thursday which killed 90 people and wounded hundreds.

The emergence of I.S. and a TTP resurgence would be a major blow to Pakistan, which had enjoyed a dramatic improvement in security over the past two years after a military-led crackdown begun in 2014. Analysts said there were “visible signs” militants were regrouping after last week’s attacks.

Islamabad launched a violent crackdown in their wake, saying it killed dozens of “terrorists” and carried out strikes on militant hideouts along the border with Afghanistan. Hundreds of families have been displaced by the firing on both sides of the border, according to officials.

Over 65 Healthcare Workers Have Died Due to...