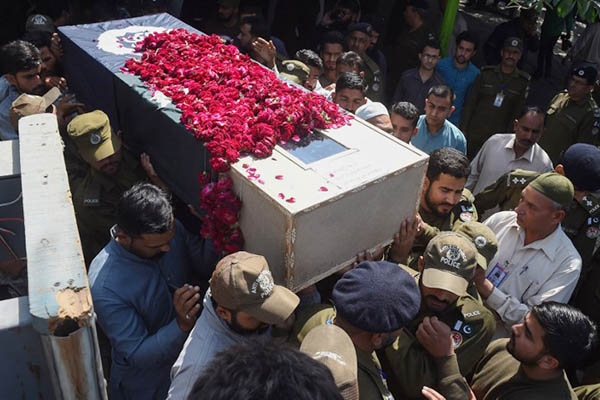 At least nine people were killed and 20 wounded late Wednesday when a suicide bomber on a motorcycle attacked a police checkpost in Lahore, officials said.

The attack took place in Lahore’s suburb of Raiwind, near a mosque hosting a religious congregation of some 60,000 people.

“At least nine people, which included five police and four civilians, have been killed…. Circumstances show it was a suicide attack,” Haider Ashraf, a senior police official in Lahore, told reporters.

At least 20 people were wounded in the attack, which targeted the police checkpost, he said.

Jam Sajjad, a spokesman for the emergency services, confirmed the death toll.

Punjab Chief Minister Shahbaz Sharif said: “The martyred policemen are our heroes. Their sacrifices will not go in vain.”

The bombing was claimed by the outlawed Tehreek–e-Taliban Pakistan (TTP) militant group in a statement sent to AFP, in which the jihadists threatened more attacks on police in retaliation for killing their “associates” in Punjab.

The U.S. State Department earlier this month offered a $5 million reward for help locating the leader of the TTP, which has been linked to bloody attacks in Pakistan and the 2010 attempted Times Square car bombing in New York.

The State Department posted the reward for information leading to the identification or location of Maulana Fazlullah, the head of the TTP, and said the group “demonstrated a close alliance with Al Qaeda.”

According to U.S. officials, TTP gave explosives training to Faisal Shahzad, who failed in his attempt to set off a car bomb in Times Square in May 2010.

The group was also behind the massacre of more than 150 people at a Peshawar school in December 2014 and the October 2012 shooting of Nobel laureate Malala Yousafzai.