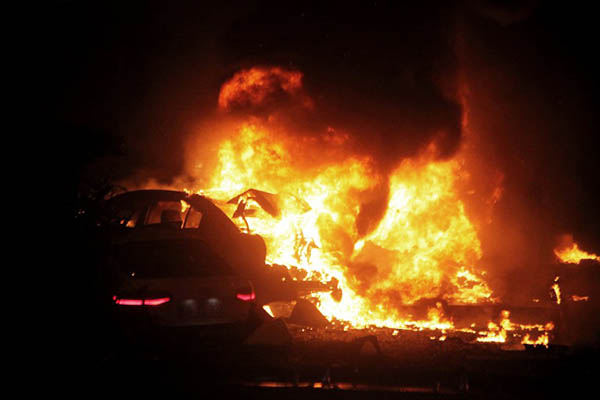 At least 37 people killed, another 125 injured in attack on bus stop near commercial area.

A suicide car bomb ripped through a busy square in central Ankara on Sunday, killing at least 37 people and wounding 125, officials said, the latest in a spate of deadly attacks to hit Turkey.

The explosion at 6:45 p.m. struck a bus stop near Kizilay square, a bustling commercial area and local transport hub, reducing buses to charred husks and damaging nearby shops. Officials said the blast was caused by a vehicle packed with explosives, which the interior minister said was driven by one or two attackers who had deliberately targeted the bus stop.

The attack is the third to strike Ankara in five months, in an area close to the prime minister’s office, parliament and foreign embassies, as Turkey grapples with twin security threats from the Islamic State group and Kurdish rebels.

As recently as Friday, the U.S. embassy issued a warning about a possible plot to attack central Ankara, advising American citizens to avoid the area. No group immediately claimed responsibility for Sunday’s killings, but Prime Minister Ahmet Davutoglu said investigators were following up on solid leads.

“We have concrete information on the terrorist group behind the attack,” he said in a statement. “We will soon have results from the inquiry, and will make them public.”

Canberra said Australia’s ambassador to Turkey James Larsen was in his car just 20 meters away from the bomb when it went off. The blast killed 34 people and wounded 125 others, 19 of them seriously, Health Minister Mehmet Muezzinoglu said. In a subsequent update, he told media three more people had died in hospital, raising the death toll to 37.

“Thirty people were killed on the spot and four others died in hospital,” Muezzinoglu said following a meeting of ministers and security officials called by Davutoglu.

A judge in Ankara banned the spreading of information about the attack online, particularly on social media sites, where photos and videos had been circulating.

It is the second major attack in the heart of Ankara in less than a month, after 29 people were killed in a suicide bombing claimed by a dissident faction of the outlawed Kurdistan Workers’ Party on Feb. 17. Sunday’s blast bore many similarities with the February bombing, which the Kurdistan Freedom Falcons, linked to the Workers’ Party, said was in revenge for operations by the Turkish military in the southeast of the country.

A two-year ceasefire between the government and Kurdish rebels collapsed last year and since December security forces have been waging a major campaign against the Workers’ Party.

President Recep Tayyip Erdogan said the government would “never abandon its right to legitimate defense against the terrorist menace.”

“Turkey is fighting a determined struggle against terrorist organizations,” he said.

The attack comes at a delicate moment for Turkey, as it seeks to persuade the European Union to speed up its path to membership of the bloc in return for help with a huge migrant crisis.

The U.S. condemned the “horrific attack,” with the White House National Security Council pledging to work with Turkey “to confront the scourge of terrorism.”

Turkey has been on high alert following a string of attacks since the middle of last year, most of them blamed on the I.S. group, including a double suicide bombing in Ankara in October that left 103 people dead.

Sunday’s attack came as strict curfews imposed in December on a number of Kurdish-dominated towns and cities were extended to two more towns in the southeast as a prelude to fresh military operations.

Authorities said restrictions would be slapped on Yuksekova, near the Iranian border, and Nusaybin, on the frontier with Syria, to “restore order and security” following an increase in “terrorist activity.”