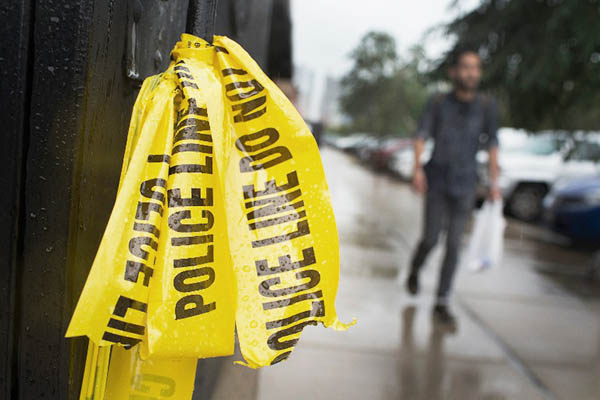 Murder rates in the U.S. rise amid concerns over worsening gun violence.

Dre, who turns 15 this month, has been unable to walk or talk since he was shot in the head, his plight a sad example of the toll taken by worsening U.S. gun violence. Deandra Yates, Dre’s mother, felt her world collapse in February 2014 when an unidentified youth—aged 17 or 18, she says—fired 22 shots into a birthday party her son was attending.

“They told me he would die or he’d be a vegetable but that’s not true,” she told AFP, reaching into her handbag for a photo of her son at a rehab center. “If you put on music he dances in his wheelchair, he smiles at you, he looks at you.”

Her son’s assailant has never been apprehended and the incident is just one more such case in a country where 88 deaths a day, including suicides, are caused by firearms. After years in decline, the pace of homicides is on the rise in some 30 big American cities.

As of Friday, homicides in the capital Washington were up 40.5 percent from a year ago at 111, police said. The situation is also worrying in St. Louis and Milwaukee, which saw the number of murders go up 60 percent and 76 percent respectively year-to-date from Aug. 11 to Aug. 31, The New York Times reported recently.

On Sept. 2, Chicago recorded nine dead by gunfire—eight homicides and the accidental death of an infant—the most in a single day in a decade.

In Cleveland, police chief Calvin Williams exclaimed last Wednesday that “enough is enough” after a three-year-old died of a gunshot wound, just days after the fatal shooting of a 5-year-old. Other big cities worried by the rising murder curve are New York, Philadelphia, Dallas and New Orleans.

Experts have trouble explaining exactly what is happening and say different factors are at work that vary from city to city. Drugs, gang wars and the proliferation of arms are cited.

“In my state, Indiana, our gun laws are very lax, so a lot of people have access to them and they are flooding the streets with them,” said Yates. “Teenagers would tell you they can get a gun for $280 and sell it, circulate it or use it.”

Conservative officials have recently pointed to a so-called Ferguson effect. Their notion is that the police are more reluctant to do their jobs because of the massive criticism unleashed by the police shooting of an unarmed black teen in Ferguson, Missouri last year. The result, they contend, is that criminals have become emboldened.

Another city that has become a symbol of urban violence is Baltimore, which was rocked by riots in April over the death of a black man, Freddie Gray, from injuries suffered while being transported in a police van. Baltimore had more murders in the first eight months of this year than in all of 2014.

Confronted with the worsening trend, Baltimore Mayor Stephanie Rawlings-Blake fired the city’s police chief and has since announced she will not run for re-election.

Rawlings-Blake attributes her city’s rising murder rate not to random violence but score settling by gangs. “The victims and the alleged perpetrators, the suspects in these cases are known to each other,” she said in a recent interview with MSNBC. “In the violence that we’ve seen in the late spring and through the summer, there was very little random violence,” she said. “What we saw was people affiliated, either loosely or closely, with organized gangs or groups retaliating back and forth.”

Meanwhile, the innocent have paid heavily in a summer of bloodshed that included the massacre of nine black worshippers at a church in Charleston, South Carolina and the shooting deaths of five members of the U.S. military in Chattanooga, Tennessee.

On Sept. 10, Yates traveled to Washington to demand tougher controls on gun sales in the United States. With her on the steps of the U.S. Capitol was Andy Parker, whose daughter Alison, a 24-year-old journalist, was gunned down last month during a live TV news broadcast in Virginia.

“Too many members of Congress remain in the pockets of the gun lobby and that has got to change,” a grieving Parker said.

Nardyne Jefferies, who also was present, told AFP she lost her only daughter, a 16-year-old, in a burst of automatic rifle fire after attending the funeral of another youth who had been shot to death.

Margaret Eaddy came to Washington with a sign covered with pictures of her son, killed at 28. “Gun violence is affecting our community really bad,” she said. “It’s an epidemic, it’s almost like genocide.”