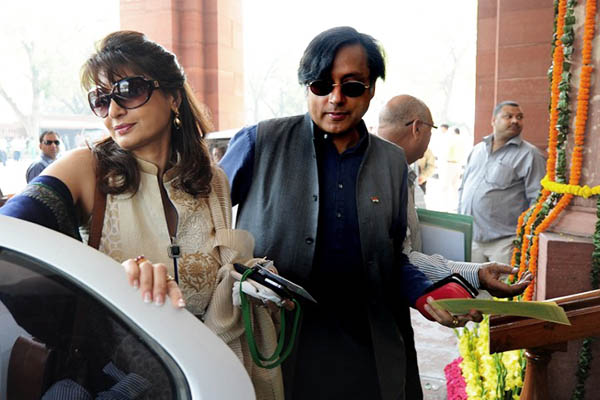 Magistrate charged with investigation says he will comment on death of Indian minister Shashi Tharoor’s wife after studying all evidence.

The wife of Indian minister Shahshi Tharoor, found dead in a luxury hotel after accusing her husband of being unfaithful, appeared to have died of drug overdose, news agency Press Trust of India said on Monday.

Tharoor, 57, the junior human resources development minister, found his wife Sunanda Pushkar dead on Friday in her five-star hotel room in New Delhi after he returned from a Congress party meeting. An autopsy report, which was submitted on Monday to a magistrate charged with investigating her death, cited a drug overdose as the cause of death, PTI reported.

According to PTI, Magistrate Alok Sharma refused to elaborate the details of the report, saying he would study it along with recorded statements of others, including that of Tharoor. “On this basis I will conclude what was the cause of death and submit a report to the police whether a case is made out or not surrounding the death and whether police should carry out further investigation or not,” Sharma was quoted as saying by PTI.

Tharoor recorded his statement on Sunday, hours after he pledged full cooperation with investigations and urged a speedy inquiry into his wife’s death, which came after she exposed his alleged affair on Twitter with a Pakistani journalist, Mehr Tarar. The death was a tragic twist in a tale of apparent marital strife that has played out in full view of the public’s gaze, both in India’s newspapers and on social media.

Sunanda Pushkar, 52, died an “unnatural, sudden death,” said doctors who performed an autopsy on Saturday, adding that more tests were needed to determine the exact cause. Pushkar’s body had “some physical injuries,” but it was unclear whether they were related to her death, Sudhir Gupta, one of three doctors who performed the autopsy, had said. Her body was cremated according to Hindu rites on the weekend.

she was drugged by tharoor, a matter of common sense! tharoor should be arrested.