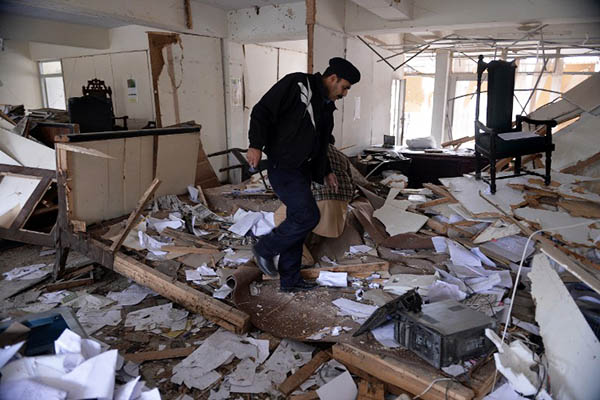 A police officer inspects the Islamabad district courts a day after 11 people were killed in a twin suicide bombing. Aamir Qureshi—AFP

The Supreme Court on Tuesday ordered authorities to identify policemen who failed to respond to a gun and suicide bomb attack on a court complex in Islamabad which killed 11 people.

Pakistan has been grappling with a homegrown Taliban insurgency since 2007. But attacks in Islamabad have been rare and Monday’s incident raises questions about the authorities’ ability to secure the city.

The judge asked for detailed reports on the incident by next Monday and ordered CCTV cameras at courthouses in Islamabad and its twin city Rawalpindi to be made fully operational within 48 hours.

Shahid Khan, the chief bureaucrat in the interior ministry, had told the court that cameras and three security scanner gates at the district courts had been broken for some time. “The Secretary Interior is directed to make the CCTV cameras functional within 48 hours and by the evening ensure that compensation to the victims’ families is announced,” the top judge said.

Islamabad police chief Sikandar Hayyat was also told to submit a report about the security detail on Monday and their response to the attack. Jillani also directed the president and secretary of the Islamabad District Bar Association to submit eyewitness accounts of the incident.

“They should explain in their statements what they saw and mention that despite their efforts the response of policemen was lukewarm and how they were reluctant to fire upon attackers,” Jillani said.

Monday’s assault on the complex of courtrooms and offices in a well-heeled area of Islamabad popular with foreign residents was the first major attack in the city since June 2011. The Pakistani Taliban denied any connection to the assault, which came two days after the militants announced a month-long ceasefire aimed at restarting stalled peace talks with the government.

More than 110 people have now been killed in militant attacks since Prime Minister Nawaz Sharif announced the talks in late January, leading some observers to question the value of the process.

A spokesman for the Ahrar-ul-Hind militant group, which recently split from the main Tehreek-e-Taliban Pakistan (TTP) umbrella group, claimed Monday’s attack. There have been reports of disagreement over talks within the TTP, and analysts have voiced fears that any splintering of the movement would render the peace process useless. But the radical cleric leading the TTP’s team for talks insisted the dialogue could still succeed.

Did our Home Minister not claim credit for the murder of the assassinated Additional Sessions Judge for one of his Policemen who apparently shot off his pistol accidentally three times into his ward?