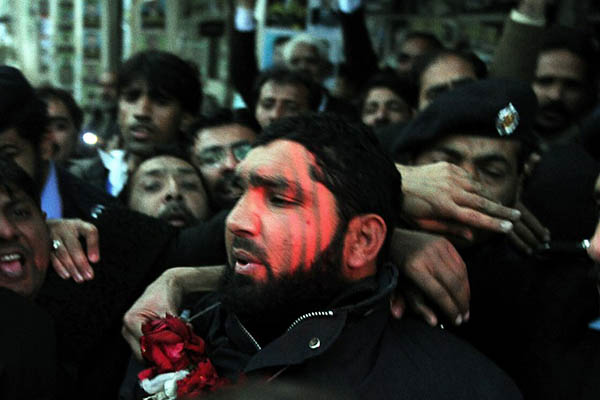 Mumtaz Qadri, the former police bodyguard on death row for assassinating Salmaan Taseer, inched closer to execution on Monday as the Supreme Court rejected his petition for a sentence review.

Islamist supporters feted Qadri as a hero after he shot the Punjab province governor 28 times in broad daylight in Islamabad in 2011. He later admitted the killing, saying he objected to the politician’s calls to reform Pakistan’s controversial blasphemy laws. Rights groups say these are frequently used to pursue vendettas, particularly against religious minorities.

Taseer had also been vocal in his support of Aasia Bibi, a Christian woman who has been on death row since 2010 after being found guilty of insulting Islam’s Prophet.

“The review petition has been dismissed” by a three-judge panel headed by Justice Asif Saeed Khosa, said Qadri’s lawyer Khwaja Muhammad Sharif. He said his client’s last option was to file a mercy petition to President Mamnoon Hussain.

In previous hearings Qadri’s lawyers drew on Islamic texts to argue that he was justified in killing Taseer, saying that by criticizing the law the politician was himself guilty of blasphemy—an argument rejected by the lead judge.

Blasphemy is a hugely sensitive issue in Pakistan, an Islamic republic of some 200 million, and Qadri has been hailed as a hero by conservatives eager to drown out any calls to soften the legislation. Critics, including European governments, say Pakistan’s blasphemy laws are largely misused, with hundreds of people languishing in jails under false charges.