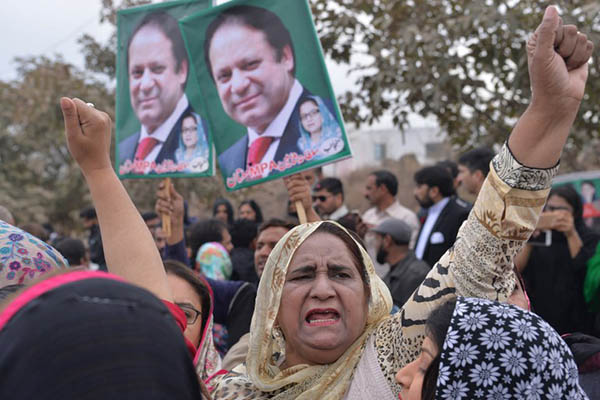 The Supreme Court ruled on Wednesday that a disqualified politician cannot lead a political party, ordering the removal of former prime minister Nawaz Sharif as head of the country’s ruling party.

The decision comes months after the Pakistan Muslim League (Nawaz) passed a law allowing Sharif to remain at its helm despite being removed from the premiership and barred from holding any office over graft allegations last July.

In the court order on Wednesday, Chief Justice Mian Saqib Nisar directed the Election Commission of Pakistan to remove Sharif as party head from all relevant records. The decision, while expected, has created uncertainty about Pakistan’s political stability, said political analyst Hasan Askari.

“It has created a serious crisis for [PMLN]… and it has also created uncertainties about the direction of [the] Pakistani political system,” Askari told AFP.

Elections for the Senate are due next month but would be postponed as a consequence of the Supreme Court ruling, he added.

The initial response from PMLN members indicates that even if he cannot be the head, “Sharif will continue to dominate the party from the sidelines,” Askari said. “So it would be a very uncertain situation at this stage.”

Sharif and his supporters have repeatedly denied allegations of corruption, suggesting the three-time prime minister is the victim of a conspiracy driven by Pakistan’s military establishment.

Sharif was the 15th prime minister in Pakistan’s 70-year history—roughly half of it under military rule—to be ousted before completing a full term.

Despite the numerous court rulings against the PMLN, the party has won a string of recent by-elections proving it will likely remain a force in the next elections.

Government on Track to Complete Census by December...